Waking up at 7:30, Etgar 36 was ready to head to Alabama. We stopped at the state line to look at our surroundings and view Alabama. Billy talked to the group and shared wisdom- we need to be open minded when coming into new situations and environments. That’s the only way we can enjoy the unexpected, by not expecting it to go one way or another. We made our way into the town of Montgomery, Alabama where Martin Luther King lead the Montgomery Improvement Association. He was chosen for his leadership and willingness to fight peacefully making him the leader of the civil rights movement. 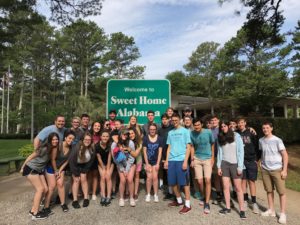 Rosa Parks left a big mark on history because she started to create tension for the bus boycotts. Our group got to tour the Rosa Parks and Bus Boycott Museum where we experienced a reenactment of the day Rosa Parks was arrested. Seeing and hearing the way the bus driver asked her to stand up was degrading. However, Rosa Parks did not give in. She replied “you may do so” when she was threatened with arrest. Rosa’s calm demeanor was impressive and inspiring when the result of her defiance could have been much worse. Thinking about all the blacks and their fight for justice really makes you think about your role as an individual. Why does the color of our skin matter? We bleed the same color. We have the same organs. We love the same things. Blacks sacrificed their lives and health to get the slightest bit of respect from whites. Their persistence and fortitude showed their grit to achieve a goal- a goal that changed history and the way we view each other based on looks. Going further, how are we going to improve our messages and the way we teach the future generation to act? We all need to focus on the big picture which is that we are all equal. No matter our lives, race, size, height, age. If liberty and justice for all really does exist- Americans need to start acting so. 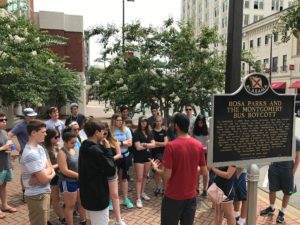 For lunch we ate at Martha’s, a small restaurant in Alabama. She talked to our group about the struggle to find happiness and believe in herself. Nobody thought she could open up her own restaurant and keep it going for so many years. Martha suffered to keep her life together, but she found God who helped her through her time of need. She finally believed in herself and her capabilities to accomplish the goal of opening up her own business. Although beliefs vary whether or not God exists- I believe we all want someone or something to help us have enough strength to accomplish our goals. We all might have a different way of getting there- and that’s okay, because we are all different. Like Martha said, it’s not about where you have been, but where you are going. All of us are heading towards the direction of building a happy life. 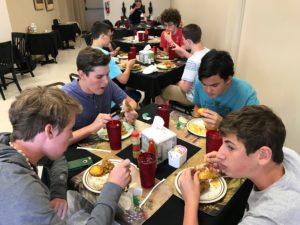 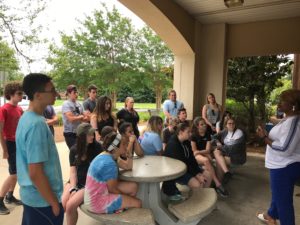 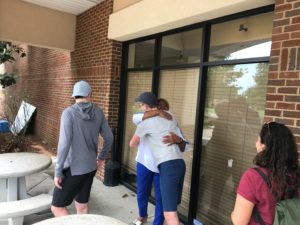 Our next location was at The Equal Justice Initiative- a legal organization where lawyers dedicate their time to defend suspected minorities and particularly abolishing the death penalty as their sentence. In addition, they fight to resolve the issue of sentencing young children as adults. However, many young men and woman are tried because of their class and race without proper evidence. For example, a man was released after 30 years for a crime he did not commit. Seeing him connect with his family again and viewing the changes of the world for first time since his arrest was emotional. It’s heartbreaking to know children are not receiving the proper care to defend their life. Thankfully, EJI is taking the time to defend these kids and to fight for their lives. 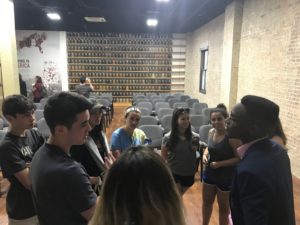 Eyes capture it all. They capture the heartbreak and the friendship. We met Bishop Woods in Birmingham and  experienced everything through his eyes. He shared the pain of seeing his leader and his loved ones killed. He saw the rise of black men and women taking a stand to fight for freedom. Why is freedom desired? Freedom is desired because it creates life. We stand together and hope freedom will give us the opportunity to build a community and live the lives we want to have. Each person needs to think about their actions and how they influence other people. We are all people trying to get through life and share it with the people we love. We need to realize “life is a reality.” 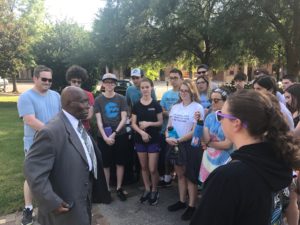 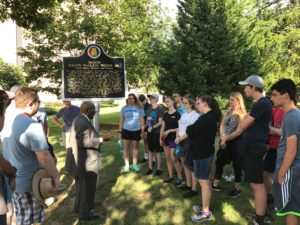