My friend opened the door and yelled at us to wake up. We only had 15 minutes left and had to be down by 9:15. After putting our luggage on the bus, we headed to Harlem to discuss the intersectionality of Jewish activism and the racism that blacks experience as recently been experienced by the police force. Behind the group, there was a large mural displaying a message of individuals rights. The beautiful painting is to encourage blacks to stand up for themselves and how to interact with the police. Incidents like what happened in Ferguson and with Eric Gardner demonstrate the kind of violence that blacks go through. We met with a Jewish activist who told us a story about him ding dong ditching at a young age. The police were called and the only consequence was a phone call to their parents. However, a few years later three black teenagers were throwing snowballs that caused a noise complaint. The police showed up- with their guns. A noise complaint, therefore guns? It doesn’t make sense and it wasn’t right. People judge based on the color of their skin. Why? Because they are different. But look! You’re different than your mother, brother, friend. Are you going to be racist towards them? No. So why start with a difference in color of skin. If God didn’t want blacks or other ethnicities, God wouldn’t have created them. So think about that and if this fighting and judging is really worth your time- cause it’s not worth mine 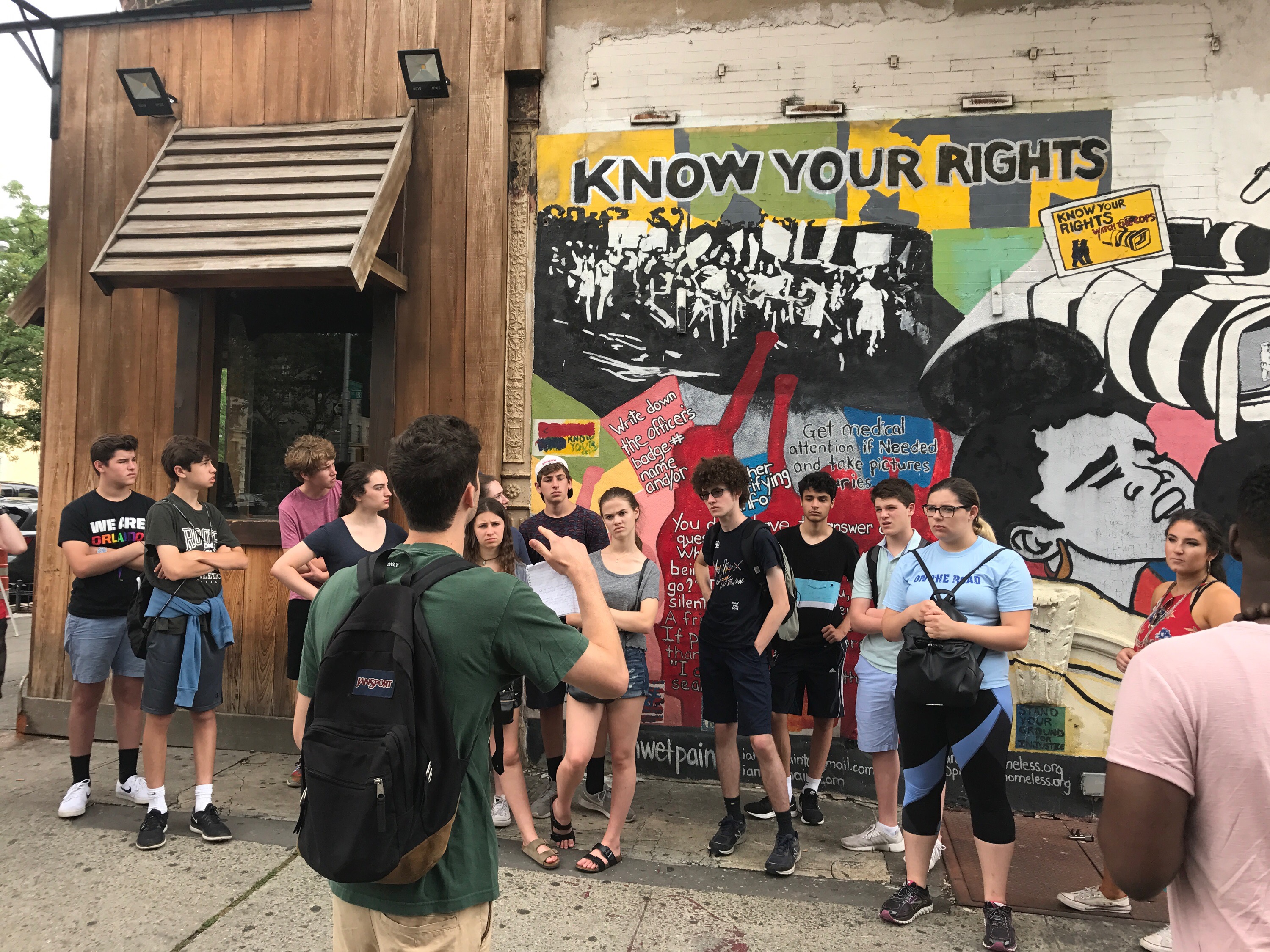 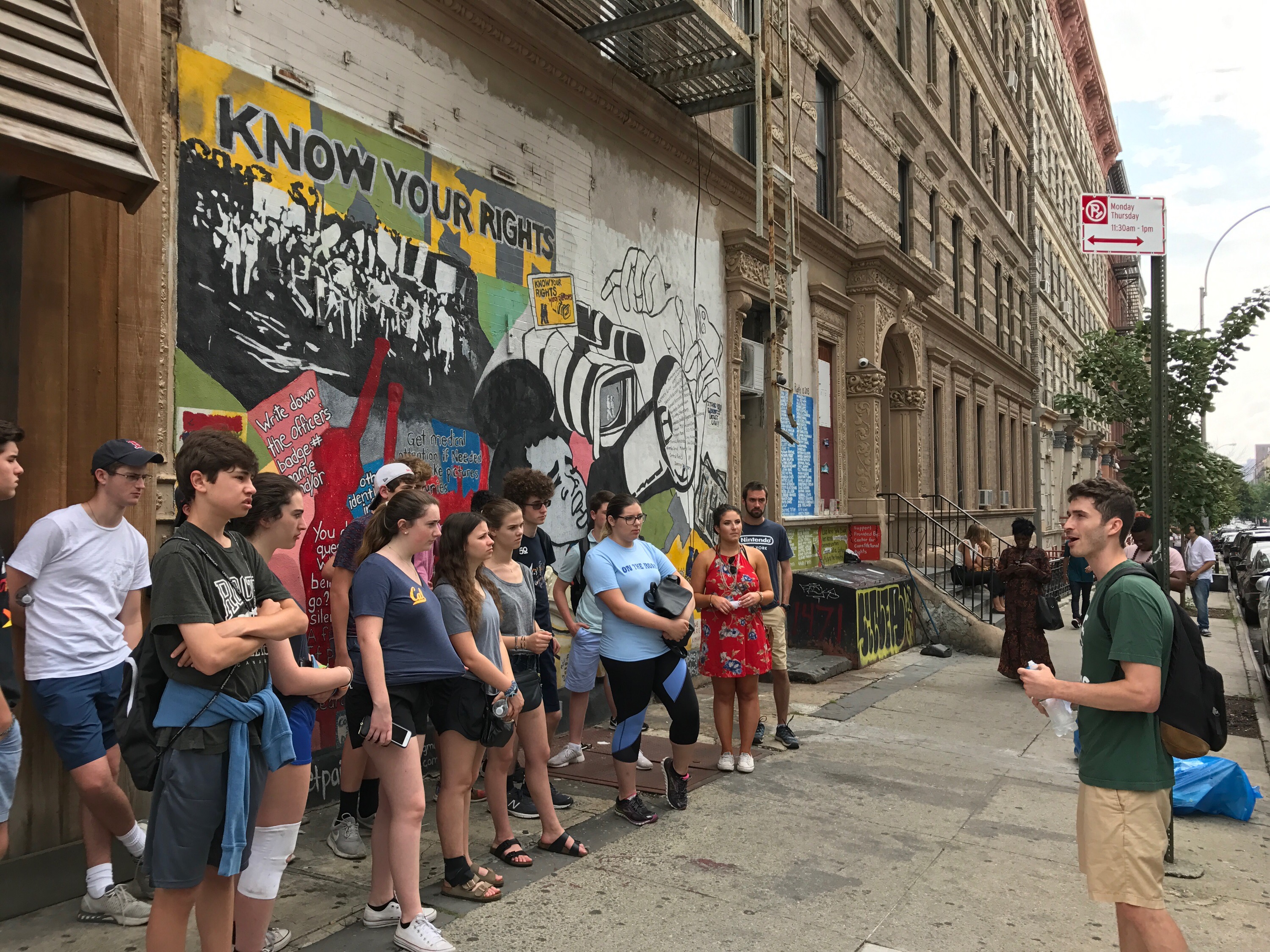 Next, we traveled on a subway to lunch in a neighborhood called Nolita. When riding the subway, etgar had the time to relax and think about the day and what’s to come. We got into groups of 2 and were able to go anywhere in the neighborhood as long as we met at 1:30 at the bookstore.

After we met up and for the next two hours and a half, our group enjoyed a bus ride towards Boston.

We stopped near Brown University in Providence for free time where my friends and I roamed around grabbing burritos and touring the university. The campus is gorgeous and I was so lucky to get a taste of the college campus. It is crazy to think I’m going to be here in few years, even nerve racking. But I heard one time a piece of advice that has helped me through everything. Don’t think in the past, it will lead to depression, and dont think in the future, it wil lead to anxiety. This means to focus in the present and take every moment in, remember to breathe. This message has helped me through thick and thin and I really think it corresponds to the theme of Etgar 36 and going along for the adventure.

Before watching Michael Phelps race the sharks on our ride to Boston, I listened to music and watched the bus ride past the trees and cloudy skies. My eyes got lost in the world and my surroundings. It’s amazing how a moment can pass by within an instant, but the memory or picture is still captured in the mind. I try to think of the night sky and the stars whenever I need to clear my head. As Billy told our group before, we are all connected in this world even though we don’t always realize it.

Etgar finally got to the hotel at 9:30 where we relaxed for an hour of free time before heading down to wrap up. We each went around the circle discussing our favorite topics and what we enjoyed in NYC. One of my favorite experiences was the Friday night services because the community was so opening to our group. The spirituality and liveliness that was felt throughout the room was powerful. “Come From Away”, the musical, was also a great experience. It was my second time seeing it and I got the chills once again. The purpose of having something good come from something tragic was definitely implemented into this play. It is crazy how one thing can impact a life. Although the 9/11memorial was not today, this visiting was very emotional for me. It made me think about God and how I thought about the world. Everyone has their own opinion and view of life, but I am still figuring out what I believe in, and truth is I might never know, which is okay with me. I can go back and forth and change my mind in the quickest second. That is what I love about being able to choose what I want since it is my life. While at the memorial, I listened to music to help me focus on the water flowing into a deep square hole. Like the tears from the killed were being washed away. Their souls being engraved in the sides of the memorial as a mark so their names identifies who they are. That they will always be remembered. I wrote a poem in the mix of time and thought I would share it. This is not meant to hurt or challenge anyone, but these are my own views.

Do you even care?

A child lost their father

A friend lost a friendship

A girl lost her world

You were the master mind behind these intentions

You were the purpose of destroying

People pray to you

Then you curse us

So what is this?

Some sort of cycle we just need to stand through?

I don’t understand you god

And that’s okay because most things aren’t understood

I just wish you would make sense- one time

That would be enough

The world needs to understand everyone is different and things change. No one can always know what they want, but if they do that is half the effort to finding happiness and striving for a better world.