The day’s journey officially began at 9:30am, when the campers filed into our respective unassigned assigned seats to travel 45 minutes to meet with Jim Pfaff. Jim Pfaff is equipped with an expansive wealth of knowledge that he was prepared to inform us about his opposition to both same sex marriage and the science that rejects man made climate change. The Rocky Mountains loomed behind the pavilion as we gathered at for our discussion. Mr. Pfaff launched into a defense of his work against same-sex marriage, which can be boiled down to his belief that the issue concerns public policy as opposed to civil rights, which would negate justice Kennedy’s scale-tipping opinion in 2015. His arguments consisted of  assumptions that i don’t agree with such as his claim that the 2015 decision redefined marriage. To me, this conflicts with his view that same-sex marriage should be approached from a purely legal standpoint and his oft-mentioned fact that the Constitution does not mention marriage. The Q and A session that followed was admittedly more intellectual than the one with the pro-life advocate, but based on the groups’ collective dismantling of his arguments on the bus afterwards, I’m pretty confident that no one departed the meeting with their opinions changed. 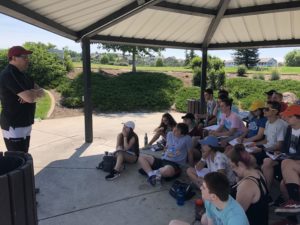 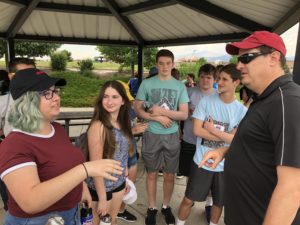 After discussing same-sex marriage, Jim Pfaff then shared with us his views concerning the falsehoods surrounding climate change. His entire argument on his belief that the vast amount of sources that refute his opinions are flawed and the few sources that support them, one of which was funded by the Heritage Foundation, are factual. Additionally, he referenced photosynthesis as a defense for his position on climate change, which didn’t seem like a valid argument to me.

Afterwards we took a five minute bus ride to the Garden of the Gods, where we reflected on our two hour discussion with Mr. Pfaff. Many of us appreciated his ability to articulate his opinions, but not his tendency to employ spin tactics when answering our questions. We were then allowed to explore the Garden, where some of us just stood awestruck at the enormous rocks lurching towards the sky and others climbed them at very safe heights. 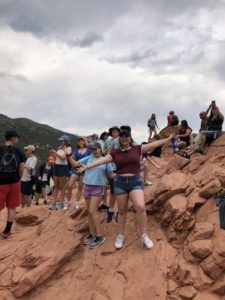 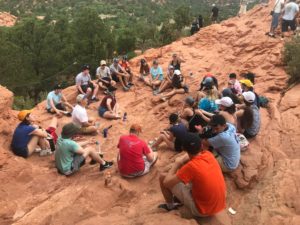 After lunch we met with Tom Mauser at Columbine High School. He is an outspoken gun control activist and father of one the victims of the tragedy that occurred there 19 years ago. After the morning’s contentious yet constructive discussion, we were relieved to engage with such an amicable person. Mr. Mauser was clearly very informed on the issue and detailed realistic legislative goals for those who support gun control. He also distributed pamphlets that counter common anti-gun control talking points. After, we stayed at the high school to watch an entertaining fireworks show as the last activity of the day. 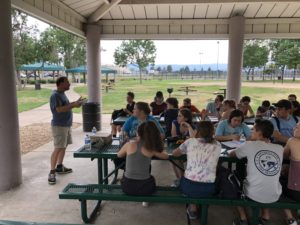 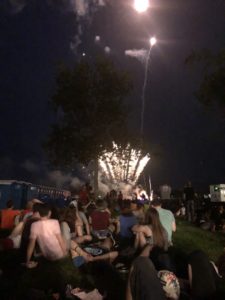 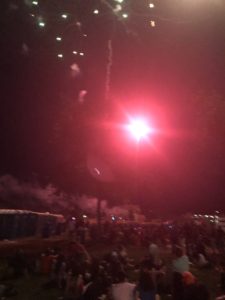