Today was by no means a slow start but began with a friend and me having breakfast while our compatriots were still sleeping and me. Once everyone was up, it was full speed ahead, with everyone loaded onto the bus by 8:15. From there, we wasted no time starting our learning at the Dr. Martin Luther King Center in downtown Atlanta, GA, where we learned about the legacy of “Sweet Auburn Avenue,” as the locals used to call it, due to its former economic prosperity for people of color which was destroyed by the government building the highway going through Auburn Ave. and stopping flow into the neighborhood and by extension destroying the majority of the area’s commerce. From there, we went to see Dr. King’s home, where we could see the clear differences of wealth within a predominantly Black community seeing a single street being divided into “Shotgun houses” (small box-shaped homes with one of the reasons it is called that is due to the idea that someone could shoot a shotgun at the entrance and the bullets would pass through the whole home) on one side with middle-class two-level townhomes on the other side including the house that Dr. King grew up. 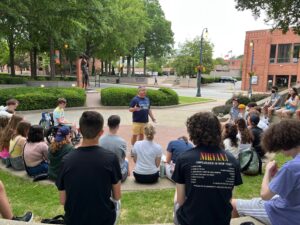 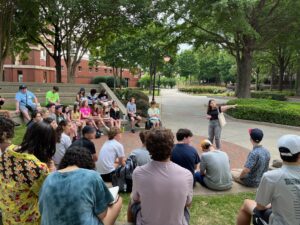 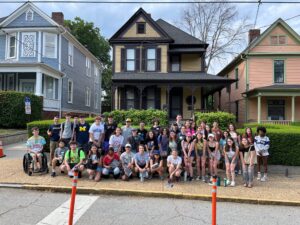 We then went to Dr. King and Coretta Scott King’s final resting place, where we could pay our respects, see and learn about non-violence in activism, and how others inspire all activists. An example is Dr. King’s ideology inspired by Mahatma Gandhi’s Non-Violent philosophy, which could be traced to philosopher Henry David Thoreau, which continued for centuries. This struck a chord with me because sometimes, in our education system, we’re taught that we believe that certain ideologies just appear without explanation of their origins. 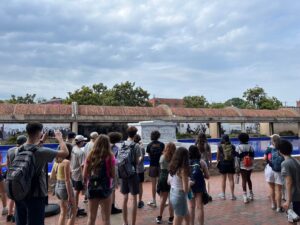 Following that, we talked with Professor Loretta Ross about the issues of “Cancel/Call-Out Culture.” Professor Ross introduced us to the idea of “Call In” instead of “Call Out” for things that someone may deem “politically incorrect” or offensive and how it is preventing us from having productive conversations by creating a feedback loop with only those who agree with us and silencing those who don’t. What is calling someone in? It is a process beginning with an internal rationale of why we feel the need to say something; we give the benefit of the doubt to their response allowing room for them to explain or apologize if they deem it necessary. This technique is effective because instead of trying to be combative with someone, you show them respect. It opens the door to progress as the “Status Quo” of yelling across the aisle only further entrenches people in their opinions. The last would be calling off, essentially postponing the conversation to a time when the person may be ready to have a more generative conversation. We concluded that call-outs should be reserved as a last resort when all else fails. I felt very validated by hearing this. Earlier this year, I was subjected to an instance in which someone disagreed with my opinion and used their sway to invalidate it, alienating me from my peers. 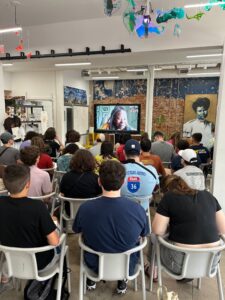 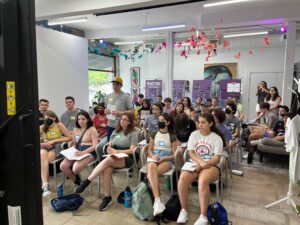 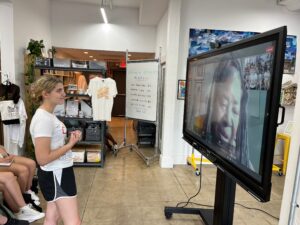 Following that, we went to a food hall and enjoyed a variety of cuisine, and I even tried Indian food for the first time there, which I thoroughly enjoyed. Afterward, we embarked on a two-hour bus ride from Atlanta to Birmingham to speak with 89-year-old Bishop Calvin Woods Sr. He played an instrumental role in the Birmingham Civil Rights demonstrations and was also the person who had driven Dr. King to the airport for his flight to Memphis making him the last person in Birmingham to see him before his tragic murder in Tennessee. While there, we saw the 16th Street Baptist Church across the street, where White Supremacists murdered 4 Black Girls in a bombing in 1963. Bishop Woods then told us his story of his role in the Civil Rights Movement and recounted the tragic deaths and sacrifices of those around him to gain equality. He showed us around the park in which men, women, and children were beaten, blasted with hoses, and had dogs set upon them with the approval of Eugene “Bull” Connor. The latter was a blatant White Supremacist and was Alabama’s Safety Commissioner for many years. We then sang and chanted songs from the Civil Rights Movement, which truly stirred me to feel the energy emanating from someone who endured so much and still stood firm and wanted to make sure the legacy of the fallen was never forgotten. Throughout, I made sure to remind myself that we will be the last generation to meet Civil Rights Leaders and just how valuable that is. From there, we had dinner at a food hall. 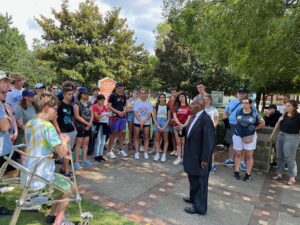 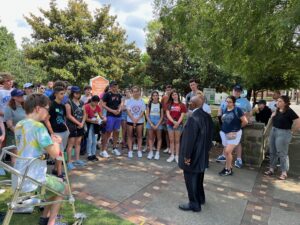 We finished the night at a bowling alley following a quote from Professor Ross: “Sometimes I just want to watch Twilight without a feminist analysis,” and we did our best to leave politics behind there to enable us to decompress from the intense topics of the day. 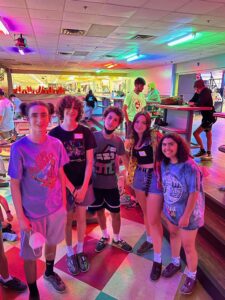 Video of us singing with Bishop Woods: