Today was my final day at Etgar, and I have mixed feelings about it because I want to continue, but I also have college stuff to do. Nonetheless, I am so grateful for the amazing 2022 Etgar family, and I’m so excited to see what everyone will do in their extremely bright futures. Today was a pretty eventful day, where we started with the Beatnik Museum, where we learned about the Beat Generation, a group of young authors who in the post-war era of the fifties and sixties wrote about social issues that inspired generations to come. We also got to take a look at City Lights Books, the first bookstore that printed paperback books. 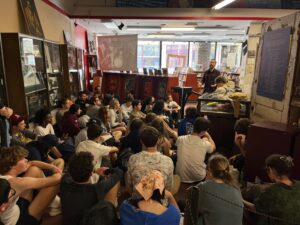 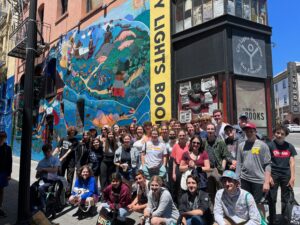 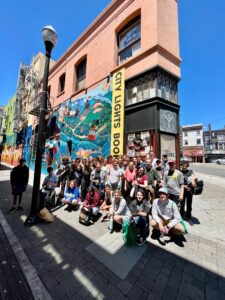 For lunch, we were allowed to choose to go to either North Beach or Chinatown; after having Asian food all throughout my first 20 days of Etgar, I decided to go to North Beach and have Italian with five friends. After wandering around & trying to decide what to get, three of us ended up stopping and getting sandwiches from a small corner sandwich shop that let us use their restroom. After getting food, we went to a park to sit and eat in the shade, which was pretty nice.

After lunch, we headed up to the Castro district to have some free time. The Castro district was very exciting, we learned a brief history of Harvey Milk, and then we were set off on our own (with group members of course). Our first stop was at an ice cream shop, where I got a small single scoop of some sort of raspberry flavor. We then preceded to walk around the main street for about 30 minutes, when we decided to head back to the meeting spot as we saw everything along the main drag.

We then had the choice of going back to the hotel or taking the street trolley over to Ghirardelli Square, which is what I chose to do. After the trolley ride, we had some time to roam around (in small groups of course) the square and try and get a view of the Golden Gate Bridge. The view from where we were wasn’t too good, so three friends and I decided to walk a bit closer to a nearby pier where we were able to get much better pictures of the bridge & Alcatraz. On our way back, we came across a guy catching crabs with his friend, who was climbing down the pier to fix the stick cage, which I thought was both frightening & pretty cool. Then, we went to the Ghirardelli store and spent way too much on brownies.

After the square, we headed back to the hotel and walked to a park where we had the wrap-up discussion for the end of the 22-day segment. Which was where I started to get emotional, as it was the closing moments of Etgar for me, and I got to hear what most people thought of San Francisco, a city I feel like I’ve personally fallen in love with, and also their thoughts about getting to know me and the four other 22-day, participants. While writing this segment at one in the morning, it hit me knowing that this is going to be the last time I’m going to see a lot of the amazing friends I’ve made over the past three weeks and with whom I’ve grown so close within such a short amount of time. Now like I said when I addressed the group for the last time, there’s so much I could say about everyone on the trip which would be an essay in itself, and I’ve already gone on long enough so I think I’ll end it here. Thank you to Billy, Josh, Eli, Calle, Liora, Sammy (I hope your hand is doing well), Jared, and all of the amazing guest speakers, new and longtime friends of the program for making this amazing experience possible. This has been a life-changing experience that I’ll remember for the rest of my life. Love, Aidan <3 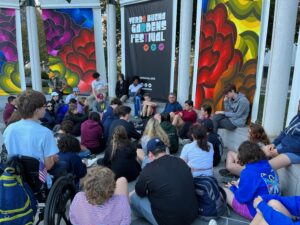 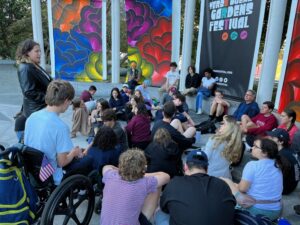