We started our day visiting South Central, a community notorious for police brutality and negative relations between residents and the police. We talked about the Watts and Rodney King riots that occurred there, both of which were cases of police brutality against black residents. We learned about the Los Angeles Police Department’s history of racial profiling and the disproportionate amount of black people that are stopped in cars or on the street in comparison to white people. Relations between communities like South Central and the police are very strained, so most people of color in LA say that they do not trust the police. 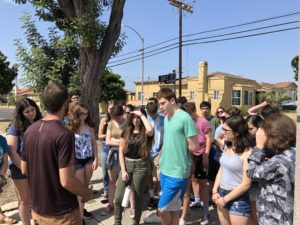 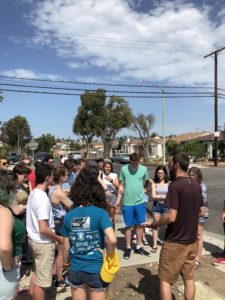 When visiting South Central, many of us found that our perceptions of the area were challenged. Several people expressed that they thought it would be more run down and filled with visible poverty because of its portrayal in the media. However, it just looked like a regular lower-middle class neighborhood, though we did notice bars on a lot of the windows. Something interesting that we learned is that the city of Los Angeles has considered renaming South Central to just South L.A., as a way to break down the negative image of the neighborhood. A lot of us expressed that this seemed like an effort to simply hide the problems there rather than fix them. To me, it seemed like a way to encourage the beginnings of gentrification in the neighborhood.

After leaving South Central, we stopped for lunch at a group of food trucks. I’ve been looking forward to the L.A food for the whole trip, and it certainly delivered! 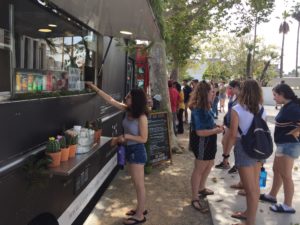 To continue our discussion about police in America, we drove to Beverly Hills to meet with Officer Joseph Lopes from the Los Angeles Police Department. Officer Lopes works in the LAPD’s Community Relations Department, which has the goals of forging connection and improving relations between the police and LA’s many different communities. Officer Lopes outlined the many tactics the LAPD is using to achieve this, most of which were focused around improving communication between police and residents. For one, the LAPD has stationed groups of officers by several low income apartment complexes to meet the people living there and figure out what’s going on in their communities. According to Lopes, this has led to more crime being reported and a reduction of crime in general. The LAPD is also trying to make connections with children by starting a program where any kid can come up to an officer and ask for stickers or baseball cards with pictures of officers on one side. They are also undergoing continuous new training, including implicit bias training to combat racial bias. 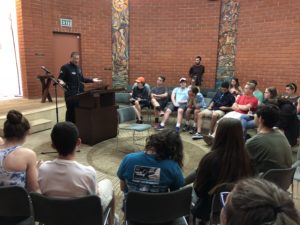 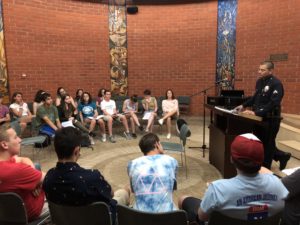 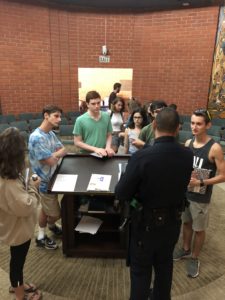 After speaking with Officer Lopes, we drove through Beverly Hills. The juxtaposition of Beverly Hills and South Central was very interesting. In general, Beverly Hills just seemed to have more stuff. There were tons of fancy restaurants and chain stores, and even something as simple as trees by the side of the road. South Central didn’t seem to have as much going on, and the stores looked more like local small businesses. Overall, Beverly Hills was much flashier, and the demographic of the people I saw was much more heavily white, while South Central had more people of color.

We stopped at a local farmers market to walk around and buy some produce from the farmers. The strawberries and peaches were delicious, and it was really cool to buy food from the farmers themselves and get to speak to them! 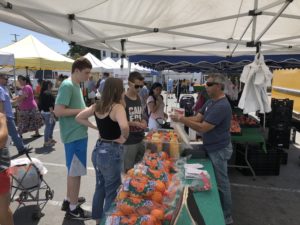 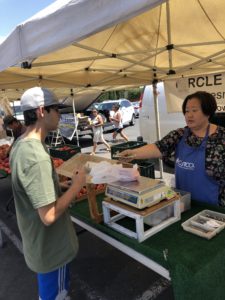 Afterwards, we made our way over to Venice Beach, which is definitely one of the funkier beaches in LA. We walked around, shopped, and just observed everything. There was so much going on, from just regular people going to the beach, to skateboarders, people working out, street musicians, and dancers. It was a really cool insight into one part of the LA culture.

After some time at the beach, we wrapped up our day at Beit Teshuva, a synagogue and rehab center for recovering addicts. We ate dinner there and heard from several different people about their battles with addiction. What was especially powerful to me was that the people that spoke to us had come from loving, well-off families, did well in school, and were otherwise a lot like us. Their stories really showed that addiction can happen to anyone, regardless of wealth, race, gender or any other factors. 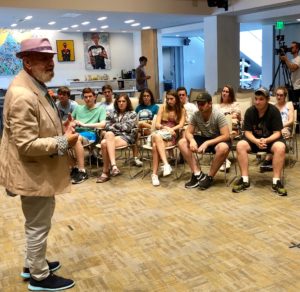 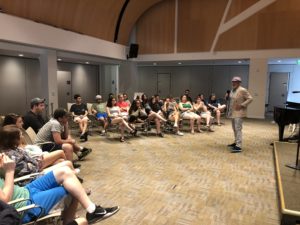