Yesterday, like most days thus far, we started our day with a 4 hour bus ride. Mid-ride, we took a stop at Peggy Sue’s diner to have a delicious brunch complemented by the cute atmosphere of an almost stereotypical 50’s diner. After arriving in L.A., we stopped at Homeboy Industries to learn about the lives of people recovering from their tumultuous past. This is an organization that helps people being released from prison gain job skills, interview skills and actually get a job in one of the many businesses they run such as a bakery, screen printing, and giving tours. As we walked around, there were people getting tattoo removals, working at the Homeboy/ Homegirl stores, and trying to simply achieve a better lifestyle then they had been living previously. Our tour guide explained how he’s been in and out of gangs since he was 12 years old, and he has always had Father G, the founder of Homeboy Industries,  and the rest of people in the organization to fall back on. It was painful to hear that so many people, unfortunately, deal with this daily. Our tour guide also brought up the fact that what children do is often because it was done by their parents. Therefore, in circumstances such as his, the world wasn’t really looking out for him until Father G came along and founded Homeboy Industries. 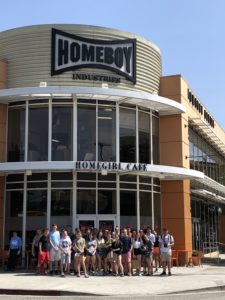 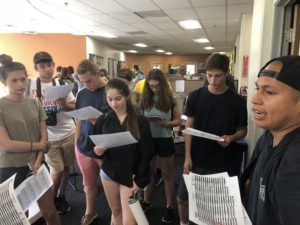 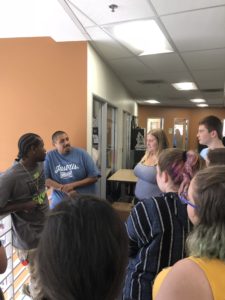 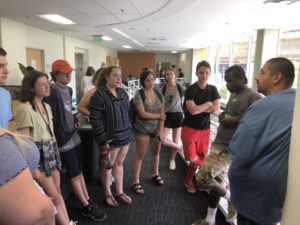 We continued on to The Grove, which is an outdoor mall consisting of many different stores and restaurants, as well as a farmers market with really good food!

Following dinner, we all walked to a Poetry Slam where we listened to people perform poetry they wrote about their problems and concerns. It was interesting to hear stories that one could tell in such simple words be explained through such complicated and beautiful language. I enjoyed listening to problems that are often brushed past, or even overlooked, and getting to hear a whole new perspective on these disappointingly common issues. 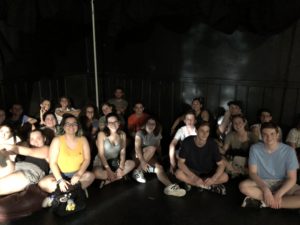 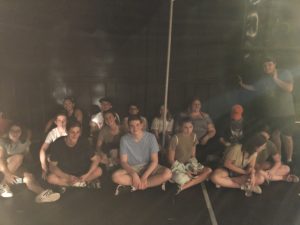