The day started off with a bus ride to Walden pond. We were all tired, per usual, but this morning there was rain which made the bus ride a little bit quieter than usual. When we arrived, we took a walk down to where we could stand right at the edge of the water. Josh introduced a couple of philosophers to us named Ralph Waldo Emerson and Henry David Thoreau. Each of us went around and read a quote from the writers. The difficult part of this for me was that we had to then interpret what we thought they meant by their writing – on the spot. I remember reading the quote and pausing, a little bit shocked at the intelligence of the quote but also nervous that I had to tell everybody what I thought it meant. Knowing Etgar and all the kids on the trip, I soon spoke with confidence and found my answer easily. 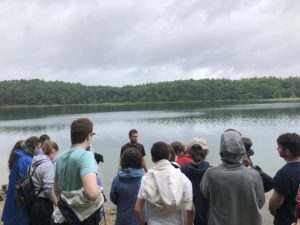 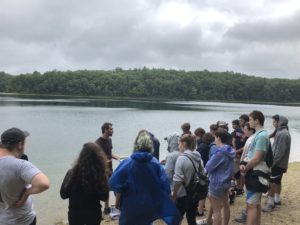 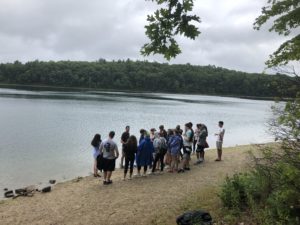 Something I found to be really interesting about the pond was that Thoreau lived in almost complete seclusion for 2 years in a little house next to the pond. It was his place to write and understand the world in a deeper sense, something he suggested each one of us should do- in our own way that works for us individually; not necessarily in isolation, though. 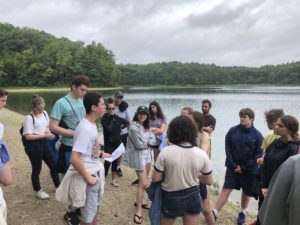 After another short bus ride, we arrived at Harvard Square for lunch. It was fun to be on a college campus with my friends and experience a new kind of independence since many of us will be going to college in the next few years. We had to navigate through Harvard Square, trying to avoid the the short periods of pouring rain. The shopping and good restaurants made it worth it.

Next we met with a man named Riahl O’Malley who works for United for a Fair Economy. We started by talking about what we each thought of when we heard “economy” and some of the repeated words or phrases were: money, business and stock market. There’s a common misconception of people thinking that just because we are young or “regular” people (as opposed to business men and women who work on Wall Street), we don’t know much about the economy. But Riahl was showing us that that is not true at all and most of the time we are more informed than we think. He talked to us about the 5 quintiles of income and how the rich are growing richer and the poor are growing poorer. It can be frustrating to think that there are people in higher positions than us that have power to create change in the country and world but aren’t using their power for the good of everyone. 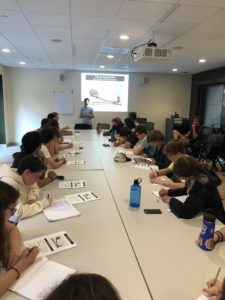 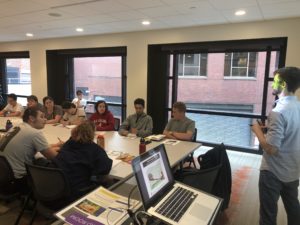 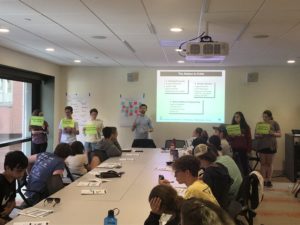 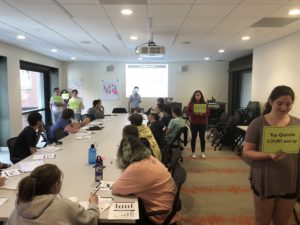 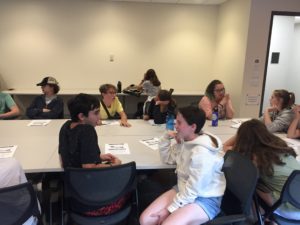 After our meeting, we walked the Freedom Trail and stopped at a few historical sights on the way so that we could experience more of Boston. I definitely would’ve enjoyed this more if it wasn’t as hot and humid, but since I haven’t been to Boston since I was young, I liked experiencing walking it in a different way than I last remembered it. 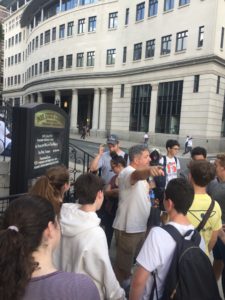 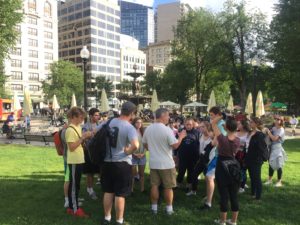 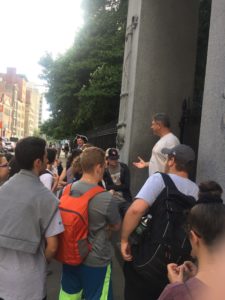 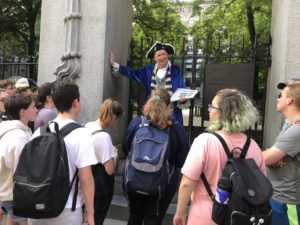 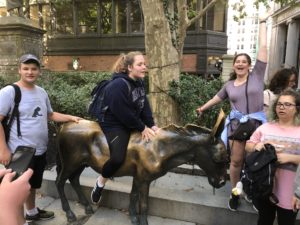 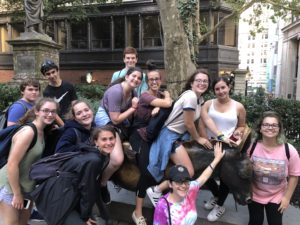 From the Freedom Trail, we had free time for dinner at Faneuil hall where there was live music and a lot of places to eat. We had about 2 hours of free time there and for about half of it, I ate and watched people pass by or play music. It was interesting to see how the culture of Boston was similar and different to where I’m from (a suburb outside of Philadelphia).

To work off some of the food we had just eaten and also see more of Boston, we took a walk before getting back on the bus. On my right I noticed a strip of bars and restaurants with people chatting at laughing. But too my left, I noticed that there was something that looked like a row of pillars stemming from the ground with steam coming out from beneath them. I wondered what it was but continued to walk. At the end of the street, Billy stopped us and we crowded around in a tight circle as he explained that behind him was a Holocaust memorial. Something that he said that stuck with me was that many of us probably didn’t even notice what it was and let it pass right by us without giving it much thought. During the Holocaust, many were turning the other way or not noticing the horrendous tragedy that was happening right before their eyes. I can’t be sure of what I would’ve done if I had lived during that time period, but I’d really like to think that I’d have enough strength and courage to use my voice for people who didn’t have one. I think that we should all speak up for the injustices that are going on currently on our world so we don’t have to look back and be ashamed that we looked the other way. 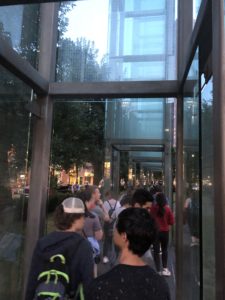 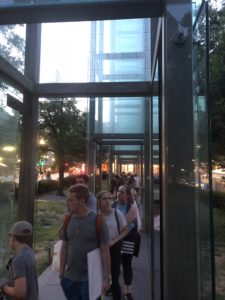 There were six pillars that you could walk through, and each had a quote on either side. As I walked through, steam was rising from the ground, but when I looked below me, there were lights under the surface of the ground that caught my eye. This was contradictory to me because I felt like the steam could’ve represented the gas chambers that were used at concentration camps, but the lights at our feet were so beautiful. I don’t know exactly how to interpret all of this, but I love how powerful art is so there isn’t one correct way to think about it.

Some of us ended the night by continuing the walk to get some cannolis but since I had already eaten my fro-yo, I stopped with a few other people at a little area with wooden swings. From the swings, we could see the buildings in front of us, all lit up against the darkness of the sky. The day came full circle because of the serenity of the pond and sitting on the swing at night. 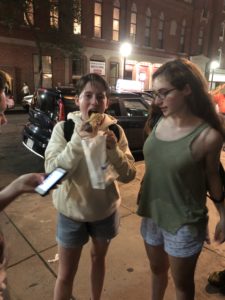