We started our day by visiting the National Coalition for the Homeless, an organization working to alleviate homelessness in America. We heard two very powerful stories from people who have struggled with homelessness, Penny and Rod. Both stories were anything but simple. Penny was homeless for ten years, and has dealt with significant trauma in her past as well as PTSD, depression, bipolar disorder and a learning disability, which were not diagnosed until adulthood. One detail about Penny’s story that stuck out to me was that the first time she went to a homeless shelter, she found out that if you didn’t have a job within three days you would have to leave. Penny was able to stay longer because of doctor’s orders, but I was still struck by the restrictiveness of the shelter. Penny has now had an apartment for 18 years and has finally found a mental health organization that would assist her (previous doctors had told her nothing was wrong and refrained from giving her a diagnosis or medication). 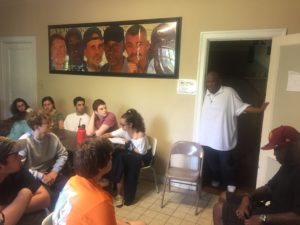 For Rod, a rebellious streak in high school put him on a cycle of being in and out of prison. According to Rod, being in and out of prison for so long made him “immune to consequences.” He “didn’t know how to return to society and just be a normal person” or maintain any kind of success for a sustained period of time. Rod said he really just needed someone to assist him and help him guide himself on his own. Similar to Penny, he has also been diagnosed with bipolar disorder. Though Rod isn’t living on the street, he has still never had his name on a lease. Both Penny and Rod now work to help and advocate for people in similar situations to them. 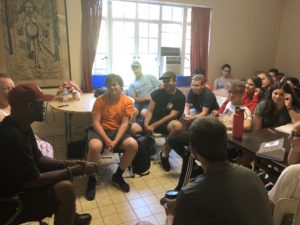 I found hearing Penny and Rod’s stories to be very powerful. I think many of us are trained to dehumanize the homeless in a way, or just write them off as lazy, dirty or a burden on the system and continually question their motives and actions. I think it’s so important to hear these people so we can begin seeing them as who they are: ordinary people who are stuck in a difficult situation and looking for assistance. 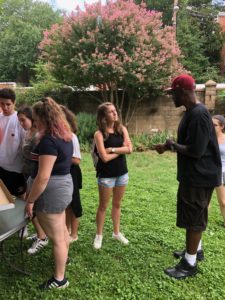 After having pizza with Penny, Rod, and Steve, the director of the coalition, we made our way to the National Archives. There, we got to view original copies of the Declaration of Independence, Constitution and Bill of Rights. Personally, I’ve visited the Archives before so it didn’t really peak my interest, but I remember finding it really cool the first time I visited. 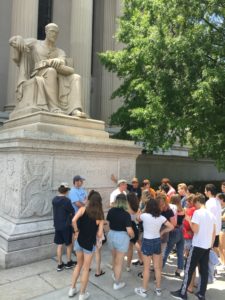 Afterwards, we went to the Smithsonian Museum of American History. I’ve also been to this museum several times before, but I consistently enjoy it. Today, I spent some time in the exhibit about America at war, but chose to focus mainly on the later wars that I’ve learned about more recently in history class. I also visited a temporary exhibit on Japanese internment which was very interesting, though I wish it had been more noticeable rather than tucked into a corner.

We had some extra time before dinner, so we spent an hour at the National Botanical Garden. We walked around, admired all the plants and took lots of pictures. Then we sat down outside the building to have our discussion about the Israeli-Palestinian conflict. This was a discussion I’d been looking forward to for a while. Though members of our group tend to fall in a similar place on most issues, I suspected that viewpoints on Israel would be much more varied. I was certainly not disappointed. We had a rich discussion that I think many of us wished could have continued on for longer! 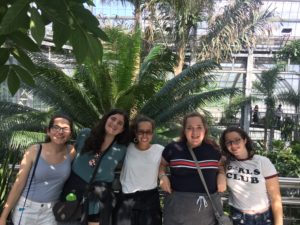 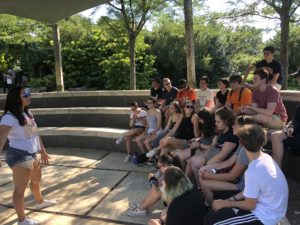 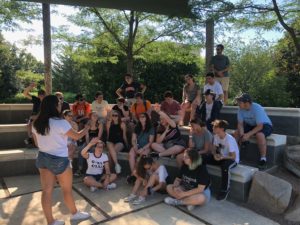 After dinner at a sandwich shop, we ended our day at the comedy show Capitol Steps. The group performed parodies of songs centered around political happenings. The actors came out after the show and we chatted with them and took a picture.

Back at the hotel, a couple of us led a group Havdalah service, celebrating the beginning of a new week. We had been trying to organize the service for a while, and it was meaningful to engage in this important Jewish ritual with my friends. 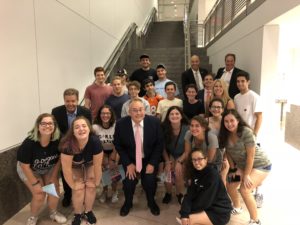 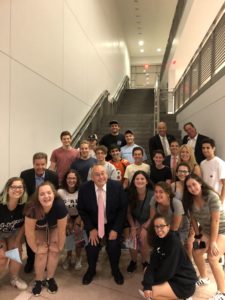