Going into our final day in San Francisco before we fly out to Chicago, we had done so many things  in the Golden Gate City. From meeting with Leon Veal, to visiting the campus of UC Berkeley, to going to the City Lights Bookstore, we had all enjoyed ourselves on our visit. The final day had a focus on exploring two distinct neighborhoods in San Fran, as well as free time to visit other parts of the city.

After sleeping in till 9:15, we headed off to the Haight. This place is known for being a center of the hippie movement throughout the 1960s and 70s, with many influential people of the time living there. On the sidewalk, some of those people had their names written down in commemoration such as Jimi Hendrix, Jerry Garcia, and Allen Ginsburg. Though much more commercialized now then back then, the area was still a fun place to explore and grab brunch. 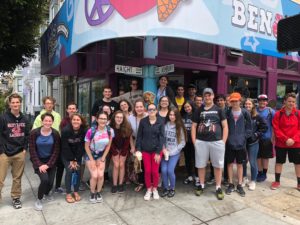 After the Haight, we boarded a bus to head to our next neighborhood, the Castro District. As many of us already knew, Castro was the center of the gay rights movement in San Francisco, and to this day is filled with many members of the LGBT community. It was very fun to roam around the neighborhood, which had many shops to visit as well as places to have a snack. Some of the advertisements there were pretty risqué, and some questioned if it was right to have things like those shown in a public place. A number of us ran into a table set up by a Dog Rescue service, where they were publicizing what they did and showing off a few dogs up for adoption. The Castro was certainly a unique place, and one that I think we all will remember for a long time. 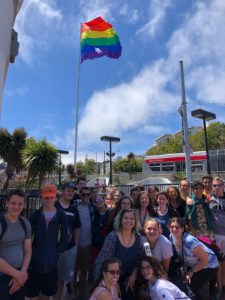 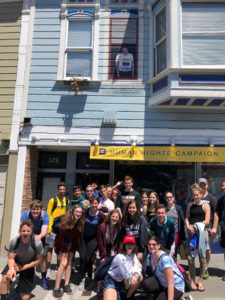 Next we had free time where we had the ability to go to a number of places throughout San Francisco. Some of us went to Ghirardelli Square to look at the Golden Gate Bridge, some went to Union Square to shop, and one of our bus mates visited an art museum. I went to Ghirardelli Square and was pretty disappointed when I realized the fog covering the bridge made it so that you could only see a little of the iconic landmark. In true Etgar sense, we still managed to have fun, walking around the area and just enjoying the cool weather.

We all reunited back at the hotel, and had some downtime before we went to a park for wrap up. Afterwards we had about twenty minutes to chill before heading off to dinner. Since we have four people who are leaving tomorrow (Sammy, Hunter, Isabela, and Caleb) we had them talk about the trip as a whole and what there favorite parts were. It is pretty sad that we are going to be without them for the rest of our journey, but we made some pretty good memories while we were together. 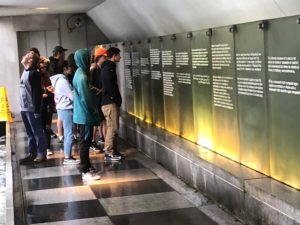 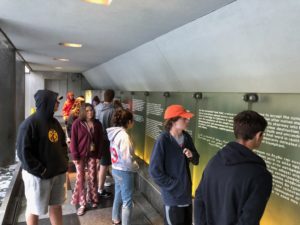 We enjoyed a fun dinner at a diner before we went back to our hotel. Tomorrow we can look forward to our flight to Chicago, and the next day our reunion with our beloved bus driver Earle. Even though some of us are not going to be here much longer, the group is still very strong and we are looking forward to what’s ahead. 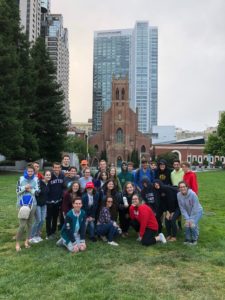