We started our day by getting back on our original bus with our beloved bus driver Earle. I think I speak for everyone on the trip in saying that he was sorely missed in San Francisco and our first day in Chicago.

With Earle back at the helm, we traveled to the Illinois Institute of Technology to meet with Henry Moss, a climate change activist affiliated with an organization called Citizens’ Climate Lobby. This organization’s mission is twofold: first, they aim to get the government to pass a federal carbon pricing policy. According to the Citizens’ Climate Lobby, a slowly rising fee on carbon emissions will effectively transform our nation from dependence on fossil fuels, which are devastating our world, to clean, renewable energy. I definitely agreed with the reasoning behind this policy: price dictated behavior, so a higher price on carbon will drive industry towards investing in and using clean energy. In addition to learning about the policy and the science behind the causes and impacts of climate change, Henry discussed how youth activism is critical to galvanizing politicians to sign impactful legislation. This ties into the second aspect of the Citzens’ Climate Lobby’s mission, which is training and empowering people to persuade their representatives to support the carbon pricing policy. One of the most powerful moments of our meeting was when we all took out our phones, and through the Citizens’ Climate Lobby website, sent emails to each of our Senate representatives, urging them to support the carbon pricing policy. Although contacting my representatives once is just one small step towards creating change, I still felt energized and hopeful that my voice can make a difference. 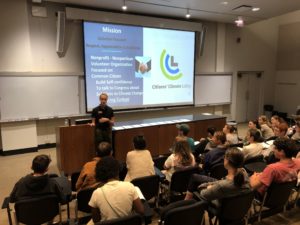 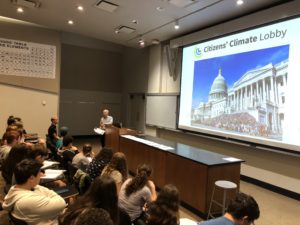 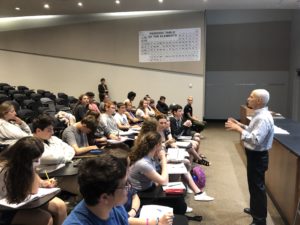 After our meeting with Henry, we traveled up Michigan Avenue to Water Tower Place, a huge mall in Chicago. I had the opportunity to meet up with my parents, which was great. Mom and Dad, I know you’re reading this – thanks for stopping by! We ate at the food court, which had so many options, my head was spinning.

I said goodbye to my parents, and then continued on to Access Living, where we met with Daisy Feidt, the Executive Vice President of the organization. I learned so much about the disability rights movement, especially about the sector that Access Living focuses on, which is independent living. Access Living works to get disabled people out of institutions and into housing within the community. This involves fixing barriers to make the environment more accessible to disabled people, rather than attempting to “fix” the people with disabilities. Daisy explained that a key factor in accessible living policy is that those who are disabled have the agency to make choices about their own lives. This philosophy of representation in the decisionmaking process is reflected by the makeup of Access Living’s board and staff, the majority of whom are disabled. This really inspired me, as I contrasted the the voices heard in Access Living’s administration to the voices heard in our federal government. Our government is overwhelmingly white and male, inaccurately reflecting the demographics of America. I think all administrative groups should model themselves after Access Living, including those affected by the decisions in the decisionmaking process. 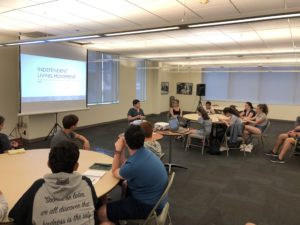 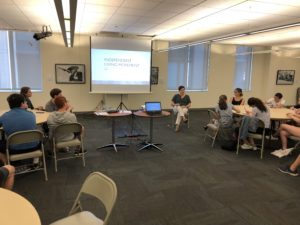 After our discussion with Daisy, we made a quick stop at a Chicago staple: Stan’s Donuts. As a Chicago native, I felt an odd sense of pride seeing everyone drool over the incredible donuts and pastries. I highly recommend making a stop at Stan’s if you ever visit Chicago.

A few donuts and a chai latte later, we were back on the bus heading east. Next stop: Cleveland!