Today marked the beginning of our final stop: the first full day in Washington DC. The day’s content did not reflect that though, as we had a packed day of dense meetings at AIPAC, Greenpeace, and J-Street. In addition, we were joined by a New York Times reporter who is covering us as part of a short series on non-traditional camps that revolve around some sort of theme.

We first met with Daniel Grey, the Senior Legislative Assistant of Policy & Government Affairs at the American-Israel Public Affairs Committee (AIPAC). AIPAC is a proponent of the American-Israel alliance and works to promote this alliance at a national level in the United States. He argued that it was necessary to support Israel in this way because Israel is the only liberal democracy in the Middle East, under constant security threats, provides military and intelligence services beneficial to the United States, and because of its technological and agricultural innovation.

Despite this, he really offered only one instance where AIPAC did not support the decision(s) made by the US and Israel, that being the 2015 Iran Nuclear Deal, in part because it repealed all the sanctions that were put in place to bring Iran to the table in the first place. 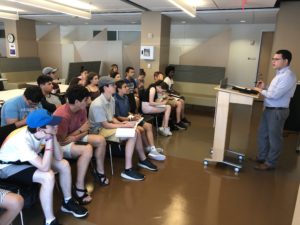 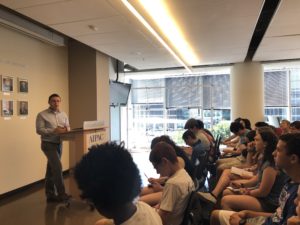 After we met with Grey and AIPAC, we had lunch in Chinatown then met with Greenpeace. We met with the Deputy Executive Director, Bill Richardson. Richardson briefed us on the history of Greenpeace and how it became a household name. He talked to us about their three main goals. First, they are trying to address climate change by reducing fossil fuels. Next they are working to protect ancient forests. Finally, they have an ocean conservation campaign, which takes three parts: protecting 30% of the world’s oceans by 2030, reducing single use plastics, and preventing offshore drilling.

Greenpeace focuses on addressing the root of the supply chain. By doing this, they hope to leverage corporate responsibility to instigate change. This includes ranking companies according to a set of standards. In doing this, they hope to create a domino effect. Company A is closest to meeting standard and changes its policy and can use that as a marketing tactic against Company B. Then B changes its policy and C and D come to ask Greenpeace what they can do. 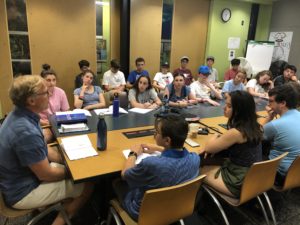 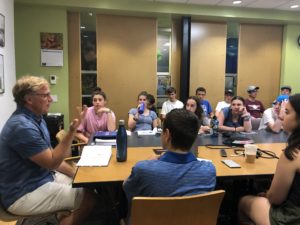 Finally, we had a first for the trip: different sides of an issue in the same day. We spoke with two representatives from J-Street, who spoke to us about J-Street’s advocacy for a two state solution and how it is possible to be Pro-Israel and also critical of it’s policies.

In doing this, we had a discussion about the words we use to describe what’s going on there. In particular, we spent some time talking about “occupation” and the way that word has different connotations depending on the context and content of the conversation. We focused on how the word was used to denote the Nazi presence in Poland and other countries in World War II, and how it implies blame.

They explained their advocacy work as well as J-Street U, which is the student activism portion of J-Street’s work. They also talked about their education aspect and how they worked to get a Palestinian opinion in Birthright, and, when they were unable to do so, arranged an alternative Birthright trip. They also mentioned their community organizing and how they were not a policy think tank. 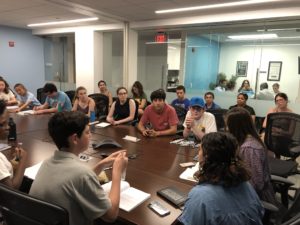 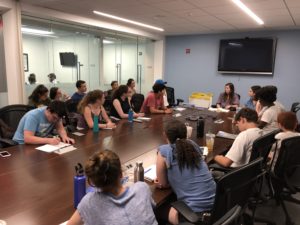 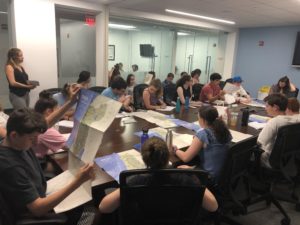 When we finished up at J-street, we headed to Georgetown for dinner, where we had a framing discussion for tomorrow’s meeting with N.O.R.M.L. on the legalization of marijuana. A handful of us (including myself) are from states where it is already legalized and shared our experiences. We also discussed the similarities between alcohol and marijuana in an effort to prepare for potential arguments that might be laid down tomorrow. Before we broke for dinner, we became the first Etgar group to unanimously agree that it should be legalized.

After this final framing discussion, we had dinner and came back to the hotel to get some rest before another packed day tomorrow. 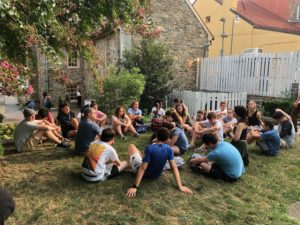 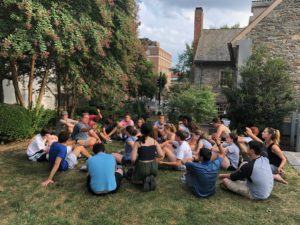