Today, our second full day in D.C., began with a meeting with The Heritage Foundation, a conservative think tank that advocates for “free enterprise, limited government, individual freedom, traditional American values, and a strong national defense.” This meeting provides the oppositional perspective to our meeting with United for a Fair Economy in Boston, during which we discussed income inequality in America and the racial and gendered elements of this epidemic. In our conversation with Dr. John York and Dr. Adam Michel at The Heritage Foundation, they presented their thoughts on the issue of income inequality – or, as they believe it to be, lack thereof – and more generally the differing definitions of what liberals versus conservatives constitute as “equality.” They described this difference in quantification of “equality” in saying that liberals strive for a wide, broader implementation of equality while conservatives “put brackets around equality.” They presented research conducted by The Heritage Foundation, some of which directly contradicted the research we analyzed at United for a Fair Economy, that suggests that, although global income inequality has increased, overall wealth has increased as well and furthermore argued that the issue of our absence of a middle class is due to the poor getting increasingly wealthier. Many in the Etgar group were upset to hear the presenters’ opinion that we should refrain from helping those in need based on a “slippery slope” fear that any government aid threatens to lead us towards communism. Furthermore, we were shocked to hear Dr. Michel, when asked why income inequality is such a large talking point in the national discussion if it is indeed not real, respond saying that the reason we are discussing what he believes to be a non-issue is because there are no other pressing national problems, and therefore the income inequality discussion is an avenue through which people can complain. Personally, I was frustrated to hear the way in which, at various points in the presentation, the presenters seemed to suggest that there is little or nothing that can be done to solve some of the country’s issues surrounding poverty, education, and other such issues, which is disconnected from the power that The Heritage Foundation holds and the direct role that the organization played in the appointment of a significant proportion of Donald Trump’s administration. However, this power is exactly why it is imperative that we were able to meet with The Heritage Foundation, as this dynamic and influential organization works behind the scenes of the political sphere to pass legislation and appoint government figures that effect our lives, whether we want them to and agree with this philosophy or not, which is why it was still an important meeting to have. 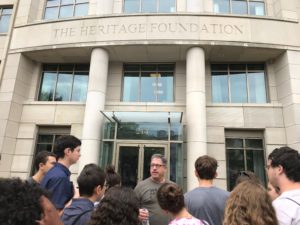 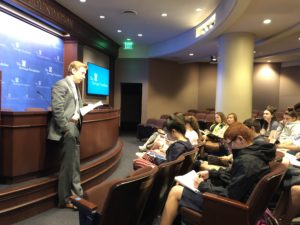 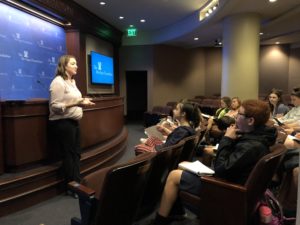 Then, after some lunch at a mall, we went to one of the organizations I have been most excited to meet with: Planned Parenthood. Ironically, as Billy pointed out, this meeting falls exactly a month after we met with Andrew Smith from pro-life Dallas. Our speaker, Laura Mayock, told us about what Planned Parenthood does as an organization, the current existential threat reproductive rights are under in America, and her own personal story that led her to become a senior community organizer for Planned Parenthood. I think that too few understand the true scope of Planned Parenthood’s work; therefore, it was interesting and important to learn about the resources the organization provides – such as STI testing and treatment, birth control, breast exams, as well as many others – that do not get any attention in the media. Mayock described the three legs of Planned Parenthood’s work, which are health care, education, and advocacy/lobbying. Furthermore, she spoke about the multiple pieces of legislation that have passed or have been proposed in various states that restrict or entirely deny reproductive and abortion rights and how this legislation pertains to the current vulnerability of Roe v. Wade because of the conservative majority in the Supreme Court. Along with many others on Etgar, I am pro-choice, and subsequently have been excitedly awaiting this meeting with Planned Parenthood. I think that, at this point in time, because of the aforementioned danger reproductive rights are in in America and because of the organization’s recent change in leadership, it is a very interesting and pertinent time to speak with Planned Parenthood. 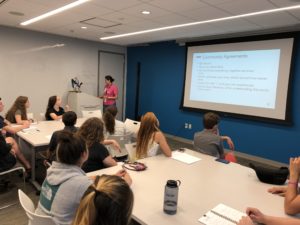 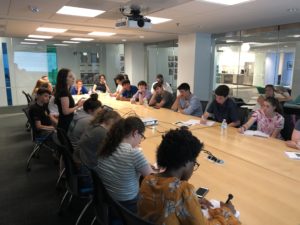 For our last meeting of the day and, sadly, our last speaker of the summer, we spoke with Carly Wolf from National Organization for the Reform of Marijuana Laws (NORML) about marijuana legalization. In the past few years, the public opinion on marijuana and marijuana legalization or decriminalization has vastly and abruptly changed. Therefore, although NORML was founded in the 1970s, their proposed ideas and goals are finally being actualized on a state-wide level. We discussed the use of marijuana criminalization in the mid-to-late 1900s as a tactic to quell white American fear of the African American and Hispanic communities and hippies and the War on Drugs’ direct relation to the horrific mass incarceration we see in modern America. In addition, Wolf spoke to us about the relative safety of marijuana in comparison to alcohol and cigarettes and the economic opportunity marijuana legalization presents. It was fascinating to meet with a group that has pushed a concept that is finally entering the public conversation and will continue to be a relevant topic in the 2020 elections. 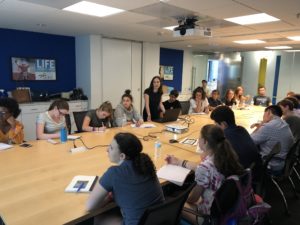 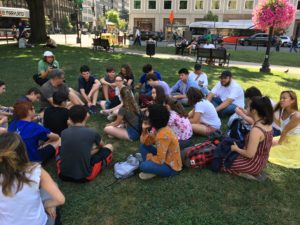 Following dinner joined by some Etgar alumnus, we went to an orthodox synagogue for our last Shabbat of the trip. This more stoic service that focuses far less on community prayer and more on individualized recitation was quite different from the reform synagogue to which I belong, although I still found the rabbi’s brief sermon and overall service interesting. The girls on the trip found ourselves uncomfortable being forced to sit in the balcony of the synagogue, where one feels like more of an onlooker than a member of the service, but I nonetheless appreciated seeing the community of women in the balcony, who chatted with one another during the service and asked us about who we were following services.

We rounded out the day with a trip to an ice cream store that boasts visits from, among others, Obama and Biden, and we all enjoyed a cool treat on a hot night. As the trip comes to a close in the next few days, I think we all have become more reflective about our Etgar experience and the bittersweetness of the packed and busy D.C. leg of the trip. We are all looking forward to the coming few days and are excited to see what else D.C. has to offer.