Today was the first early wake up in a while, but we got on the bus ready to take on some double digit temperatures. We drove through the deserts of Nevada for about three hours, and then we stopped for lunch. To our surprise,  there was a plethora of options from which we could choose. Some chose to go to Pollo Loco or Chipotle, and others decided to try the west’s best fast food restaurant, In-N-Out Burger. There was a small crowd that ordered breakfast at Denny’s. Overall, it seems that everyone was happy with their meals. After a few more hours of driving, we made it from Sin City to the City of Angels!
We arrived at Redondo beach, where the sky was covered with what the Californians call “June gloom.” We met with Patrick Jones, a Republican who did not support Donald Trump. Patrick talked about how he got into politics and how he has been drifting away from the Republican Party throughout the past decade, especially during the years of the Trump administration. He shared his ideas on how the GOP could use some more modern solutions to more modern ideas, and that he is still looking for a candidate in the Republican Party with whom his political ideals align. From what I heard about his ideas, and also due to the chatter after the presentation, many thought that Patrick’s ideas and thoughts were oriented further left than we had anticipated. 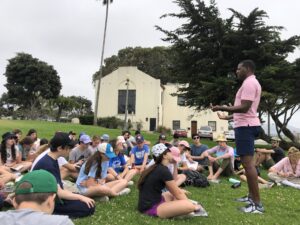 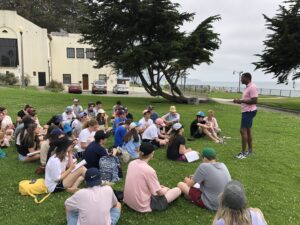 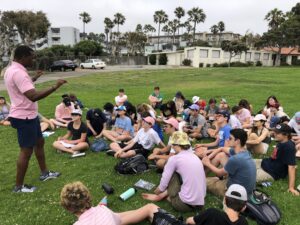 After the intriguing discussion with Patrick, we headed over to the Grove Farmer’s Market  market to buy dinner. There was a plethora of options from crepes to burgers to burritos to sushi. It was easy to see how this reflected the welcoming of diversity in L.A. Everyone was happy with their meals (until Noah let people taste his very spicy hot sauce), and we were happy to contribute to a conglomeration of small businesses
After dinner, we visited Beit Teshuvah, a synagogue for recovering addicts of all kinds. We heard Nathan, McKenna, and Jessica’s stories about their addiction, and we learned about how they found Beit Teshuvah. Their stories were very inspiring, and they weren’t the stereotypical school presentation on alcohol and drugs. It felt more relatable and personal than the lessons we are taught at school, but that’s why we all are on the trip in the first place. After some encouraging words and hugs goodbye, we headed to our hotel to get ready for another big day tomorrow! 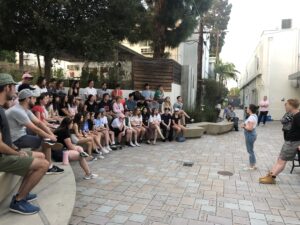 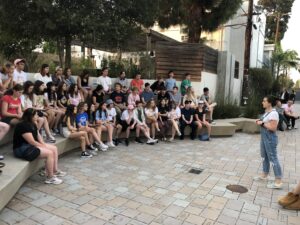