Today we met with Dean John Levine at the Embarcadero. Embarcadero is Spanish for embarking, and the place held that name because the area used to be a huge port for trade. Near our spot was a marching band warming up with scales on top of normal city noise. We ended up moving twice for a good spot; The Dean stood on road pavement while we sat on the curb. Dean John started off by telling us his background. He’s the former Dean of Northwestern Journalism. He left college with a major in liberal arts, started working for a daily newspaper, and landed at his position all using the same question: How do I help people be better informed? I don’t remember the questions everyone asked clearly, but his answers are still in my head.
His first big point: Present day media is monopolized. One of the biggest revelations in media today is the two way flow from the poster, and the consumer. Recent day media is also personalized way beyond what we would consider comfortable; and you and your whereabout are followed constantly. His second point was in education. The present education system is very flawed, and COVID did good in bringing mass awareness to topics including these. While some kids struggled during online learning, others thrived. Instead of a universalized education, it should be personalized to maximize the benefit of school in the first place. School also defines a common ending point for learning and a start for work, when it should be well known that learning should never stop. The final point I remember was about truth. Nothing is 100% true. According to Dean Levine, media is not the truth, but an approximation of it, a pursuit of the truth. It also isn’t immune to corruption and lies, which is another reason why you should always read conflicting sources, and get both sides before decisions. Personally, I liked his voice. I was worried he’d get bumped by a car multiple times during the speech- but all ended well. It was a soothing lecture that I will take to heart! 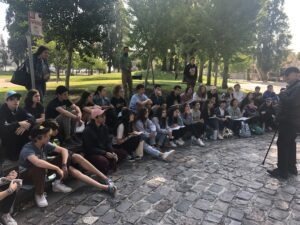 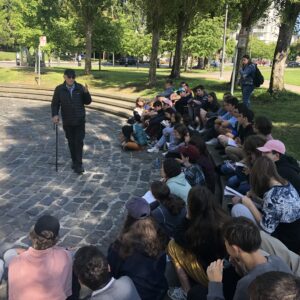 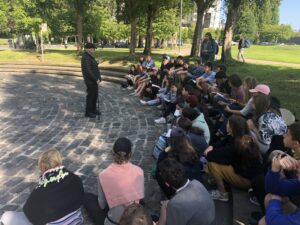 After the meeting, Josh talked about the Spanish Civil War Memorial, not far from where we stood. In Spain, there was a civil war essentially between communism and fascism, and a dictator named France waged a war against the Spanish government to try and overthrow it. Only Mexico and the Soviet Union aided Spain officially as allies in the Civil War. However, people in different countries would help in a variety of ways to bring light to the war, these included artists and 3000 Americans who traveled to Spain to fight (900 of which died).
We grabbed lunch on Haight-Ashbury, or the place of the hippie uprising. My group and I went to a place called Flippin’ Burger, and the guy at the cash register was our age. His name was Rapha Mop, and he was really nice. It was a semi-fast-food place but they brought us all water, and food to our table. Rapha pointed out where the Ben and Jerry’s was for Talia. Haight had some of the most welcoming and friendly people I’ve seen in my life. The one running the Ben and Jerry’s asked me to “fetch my bud” some napkins on the way out, and multiple passers-by helped Max when he got gum on the bottom of his shoe. Nobody was afraid to socialize; it might’ve been the air of the neighborhood. 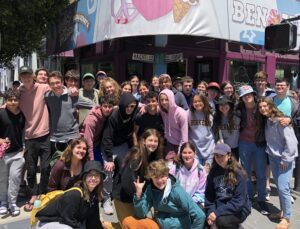 After lunch, we got on a bus to Castro Street, or the gay uprising. The moment we got off the bus we saw a sex toy shop and a naked man wearing something on their genitals. Not the best first impression, but the area felt very welcoming, along with the people there.
We were grouped up and given a choice for our next courses of action. We could individually choose to go back to the hotel, to a baseball stadium, or to Ghirardelli to get chocolate and see the Golden Gate Bridge. I chose Ghirardelli with most people mainly to see the bridge.
Back at the hotel, I got in a small workout in before we left for the evening. Our trip reflection spot was in the middle of a park on a circle. The most obvious point was that we have all formed bonds of friendship on the trip. We had our final meal together in a diner, and I successfully pulled off the unhealthiest vegetarian day possible—at least it was vegetarian.
As a post-dinner goodbye for our last full day together, everyone exchanged hugs before we entered to hotel to rest.