For those brave enough to get up early, the day began by heading to Esse-a-Bagels. Debatably the best bagels on the east coast, Esse features only the boldest cream cheese flavors and is often famous for giving more cream cheese than bagel.
We then went back to the hotel to eat on the rooftop, which features a gorgeous overlook of the city. After sprinting down a flight of stairs to take the subway on time, the group headed to Battery Park to see the Statue of Liberty and Ellis Island. There we discussed the alleged American Dream and what it means to each of us. A common consensus was that the dream once strived for by immigrants and individuals no longer effectively exists under the current system. With a desire to improve the country, it is up to us – the next generation – to continue past efforts to make that dream more attainable. 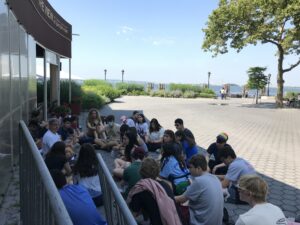 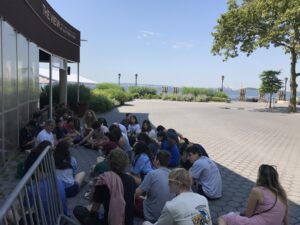 After taking (very distant) photos in front of the Statue of Liberty, we then walked to the Wall Street Financial District to discuss the Occupy Wall Street protest in the area it started, Zuccotti Park. From there, we headed to the 9/11 memorial. On our way, we accidentally walked into the shooting of an unnamed NBC television series pilot episode. Although our efforts to be cameoed were denied, we continued our walk to the site, where one of the counselors shared her personal story of the event and how it dramatically impacted her life. 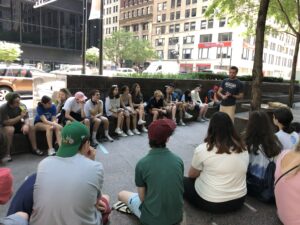 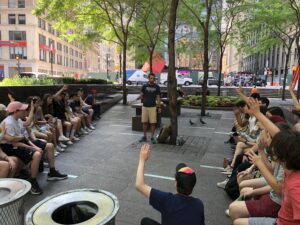 The memorial itself is a reflection pool with waterfalls running below into the center. While walking around to view the names of those who died, it is heartbreaking to see the various first responders and victims of that day. Listening to people vividly recall where they were that day only emphasized the impact it had on United States citizens and countries worldwide. 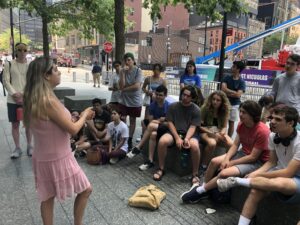 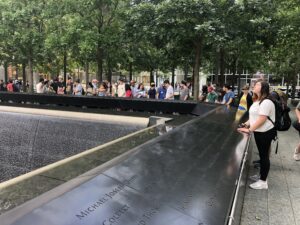 Following the memorial, we rode the subway to meet at an Etgar alum’s, Ben and Sarah Sachs, apartment courtyard. They greeted us with pizza and salad. We also met 2005 alum Micah Chervin. In a final consensus, despite the ongoing debate, I regrettably have to give Chicago deep-dish the crown for the best pizza – at least for this round (sorry, New Yorkers).
After lunch, we took a treacherously far walk to Central Park. We sat on the grass to listen to David “the guitar man” Ippolito, who warmly greeted us. We gave the crowd some extra pizza and chips before walking about the park. During our free time, many people branched off to do various activities: dancing to Ippolito, meeting friends, and getting some food. Having never been to New York before, I found the bustling environment exhilarating. Some of us rented bikes and rode around Central Park (exhausting but well worth the ride). 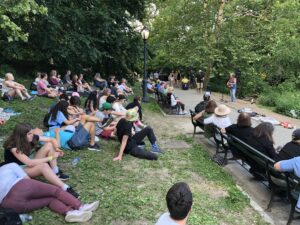 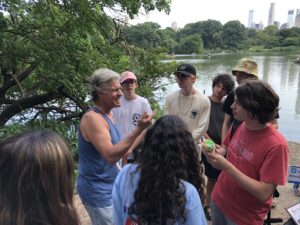 Two hours later, everyone met up again as Ippolito sang his version of the song “Imagine” by John Lennon, featuring Etgar. We then walked to visit the Lennon memorial in Strawberry Fields. Leaving Central Park, we retook the subway and headed to Chinatown and Little Italy. There, we discussed the importance of inclusion and mixing cultures in the community. While walking through and taking in the different cultures and architecture, it was easy to sense the rich history and community that enraptured the area. Many of us stopped to get desserts and boba in Little Italy (but most importantly, to use the restroom). We also dusted off our bartering skills to buy some souvenirs. 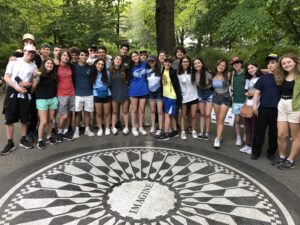 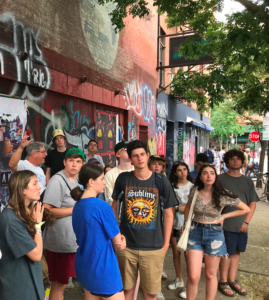 For dinner, we took the subway once more to head to Greenwich Village. There many people got the chance to meet with their friends and family. We were given a lot of time to eat and take in New York City on our last day there.
Back at the hotel, we ended the day by hanging out with each other and saying goodbye to Amira and Jordan, who will be staying behind tomorrow as we continue our journey to Boston.
Looking back on New York, I see why it is so loved by tourists and natives alike. While the walking was at times grueling, the energy and spirit of its people are unparalleled. Until next time!