This year was the first time Etgar has been to Tulsa, Oklahoma and it was well worth it!

In Oklahoma, there are many reservations because as time went on the people kept moving the Native Americans more east. It is where the farmland is not great so they were pushed here. They had hard times and still do today as many of them are poor and struggled with Covid because they do not have access to good health care.
We began our visit by discussing the Dust Bowl. The people in Oklahoma had manifest destiny, where the white people believed that they had the God given right to expand their land. Even though they did not have much money or experience, they needed to continue farming the land. Poor farming practices then intensified a natural drought, not having water to drink or to farm. There was also lots of wind. Both the drought and wind resulted in dust storms (aka The Dust Bowl). These dust storms covered everything and people got dust anomia, making them very sick. They kept praying rain would come but it never did. April 14, 1935 is called Black Sunday because over 3 million tons of dusk went over Oklahoma and over the east.
After, we went to the Tower of Reconciliation where we talked about the Tulsa Race Massacre. In Greenwood, blacks in Oklahoma were becoming wealthier and owning businesses; this made white people mad. On May 31, 1921 an African American teenager named Dick Rowland was accused of assaulting a women in an elevator and she hit him back with her purse. A white mob came together to get him lynched but World War Veterans defended him. There was a shot fired and then the next day there were planes dropping bombs and people were shooting one another. By the end of the day all of Greenwood was destroyed. 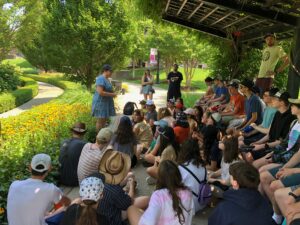 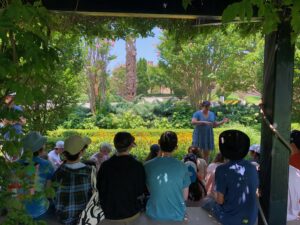 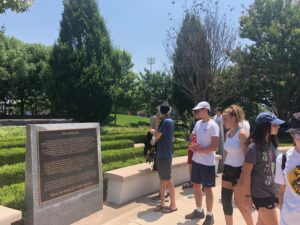 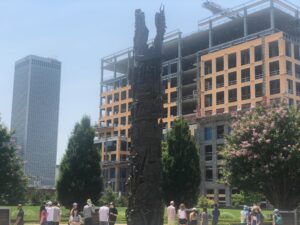 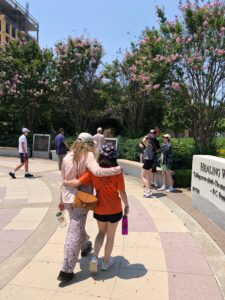 We read through Woodrow Guthrie’s song, “This Land is Your Land.” It is seen to be a patriotic song (which is what I thought it was). However, if you dig deeper into the song, it questions if “this land was made for you and me” by speaking on inequality. Woody Guthrie was born in Oklahoma in 1912. He was a singer who was very strategic in his word choice in his songs. He also was one of the few artists who collaborated with artists of other races, such as African Americans. He showed America the reality of our country’s issues and that integration is necessary. 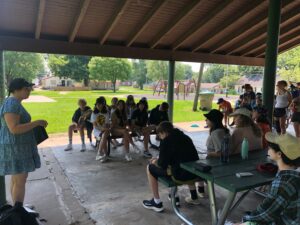 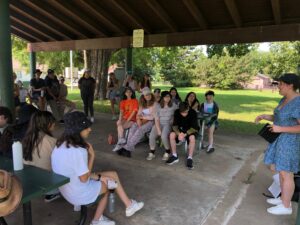 After going to a delicious donut shop, we spoke to Sam Flower, a guide in the Woody Guthrie Museum. He told us of a rap album done by African Americans called, “Fire in Little Africa”, about them never learning about the Tulsa Race Massacre even though it impacts all people in Oklahoma. This happened 100 years ago in 1921 and has not been taught in American history for 100 years (I had never heard of it before).
While it had been required to teach Oklahoma history, such as the Tulsa Race Massacre, within the state, the governor announced in May that if anyone feels the topic is too uncomfortable (if it has to do with race or sex) they do not have to learn about it. The kids are allowed to leave school and go home so they do not have to listen. One reason this was done, in Sams opinion, is because of critical race theory. Sam Flower was asking us if there is a white, black, and Latino section of our towns and we all said yes, including mine in South Orange, New Jersey. This really spoke to me how it is important to know that issues of race have happened everywhere. I realized there are many unknown instances of racism everywhere, so I need to keep learning about them. Sam Flower said “In the next 100 years we can turn things around.” Being in this generation, I have realized so far on this trip that I can make an impact even in small ways by learning and speak up when something is not right. We need to understand and follow Woody Guthrie’s concepts of life in America. 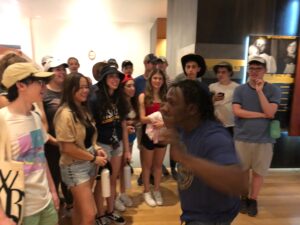 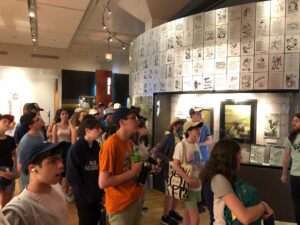 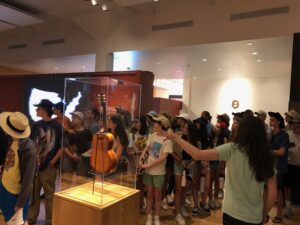 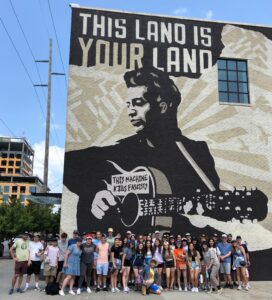 Next, we traveled to the Oklahoma City Bombing Memorial. The bombing was from a terrorist truck; it killed 168 people and destroyed about 324 buildings, including a nursery. What I find interesting is the meaning behind the structure of memorials. This memorial has water on the ground in between to walls that say 9:01 and 9:03. This is because the bombing happened at 9:02. The water, which is a part of memorials a lot, is a symbol of the major minute of the bombing. To me it represents that as water flows, the memory of the event and people continue to be remembered. Water is also peaceful and allows for remembering the victims in a peaceful way. Lastly, the long stream of water shows that minute of the bombing has had lasting impact. 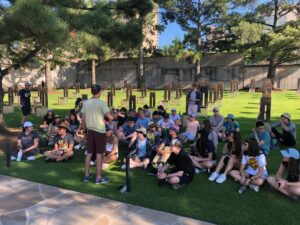 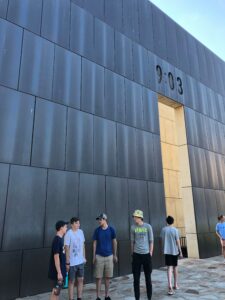 We then went to the Minor League Oklahoma City Dodgers game (they lost but it was still fun)! After the game, went back to the memorial at night. With the light in the structures, that represent the people who passed away, reflecting on the water, it showed me the reflection of the lives they led in the world. There, Billy told us a story that the day before his 21st birthday he was going to a basketball game with his friends. They heard about this plane that was coming from Europe. They heard it was being flown by a terrorist. They found out that there were 38 people from his college that were on that plane from studying abroad, including his old roommate and girlfriend. After that we all, including myself, started to tear up. It was so impactful. Billy told us he sees hope in us. This trip is making me realize that I can and have to make a difference in this world and that time is so precious. 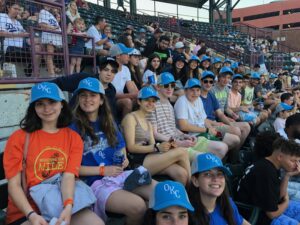