Today we finally got the heck out of Dodge! We didn’t get to sleep in because we had to start the long drive to our next destination, Denver, Colorado. On the bus, we got some more glimpses into the beautiful countryside of Oklahoma. The terrain is filled with rolling hills, fields, railroads, a shocking amount of cows, and a few….fracking machines? Don’t focus on that last part. 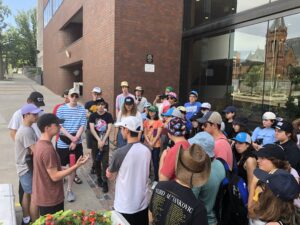 After a six hour drive we finally reached Denver! We’re in Mountain Daylight Time now. Denver is one mile above sea level, so we’ve been drinking a lot of water to help prevent altitude sickness. Denver is home to the place where the cheeseburger was trademarked, more marijuana dispensaries than Starbucks’s, and a thirty two foot tall fiberglass statue of a blue horse that some say is cursed. After Joe gave us a short talk about land runs (which are fascinating) we learned that Denver is also the home of Unite America, run by Nick Troino. When he was young, Nick participated in a camp where the participants pretended to be the government, starting his interest in politics. He worked to try to pass bipartisan solutions to our nation’s budgetary issues in his early twenties, and couldn’t get people on opposing parties to agree, or even communicate much. He ended up running for Congress as an Independent candidate in 2014 when he was twenty four but lost, at least partially, because people didn’t want to risk the candidate they liked the least winning by taking votes away from a candidate who could viably win that they like a little less. He then decided he wanted to help with electoral reformation, and work to remove the incentive for congresspeople to vote along party lines (allowing them to actually get things done).
The two things he’s focusing on with Unite America are nonpartisan primaries and ranged-choice voting. Nonpartisan primaries would essentially put every candidate in the state primary, regardless of political party, in the same primary. This would make the primaries matter more because more people would be able to vote in them. Currently, primaries have much lower turnout and even more restrictions on who can vote. The ranked choice voting system would allow you to rank all candidates running in both the primaries and the general election. This creates more of a competition, lowering the chance that the candidate is decided by where the voter lives, and helps take away the risk of taking away votes from a more viable candidate. His  organization helped raise money and pass both of these solutions in Alaska before the 2020 elections. He also apparently has support from a former CEO of Panera Bread, take that however you will.
All the election reform ideas seemed like a good idea, but I don’t think it will become as good as he envisioned it. Compromise can’t work on some issues that are becoming work prevalent, like marriage equality potentially being revoked, or abortion, or issues like that. We also did get a small peak into his personal politics when he put such an emphasis on the national debt (which isn’t a great indicator of government spending problems) or wanting to keep the filibuster, which I don’t agree with. Overall, his election reform ideas seem like they’d be positive changes for the United States, even if they don’t create the perfect sharing of ideas and functional democracy he implied they would. 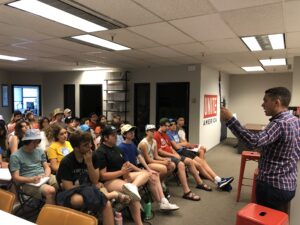 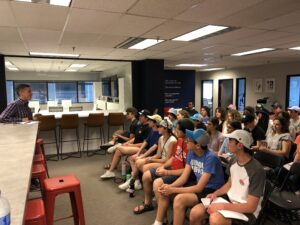 After listening to Nick, we went outside the Colorado Capital building and visited two civil rights activists for people with disabilities, Dawn Russell and Barry Rosenburg. Barry talked about his work with other noted activist Wade Blank at a nursing home. Many of the people in those homes didn’t like being there, but were placed there against their will (by doctors and parents who didn’t want to deal with them). They were locked away in institutions that dehumanized them. Apparently, it was a common belief that the disabled gave off a bad odor, so they were usually high up and isolated. Wade and Barry worked to make the homes more hospitable, by providing wine at dinners, bringing in pets, and taking the residents on trips. Barry went to Berkeley California, and saw that disabled people had more freedoms there. He and Wade tried setting up apartments in Denver for the disabled, which Wade called Atlantis. However, they were sidetracked when they realized how expensive transportation was for the disabled in Denver. It cost around fifty dollars (hundreds of dollars in today’s money) in the sixties and seventies for people with disabilities to go across town to see a movie. They were usually only provided ten or twenty dollars to use (Barry informed me afterwards that some institutions actually had more and kept it for themselves, and he helped file a lawsuit against them) which made doing anything near impossible.
In 1978, protesters stood on the streets in front of where the buses were supposed to park in protest. Many of the protesters were from a group Barry helped form called Mobility Amongst the Disabled (MAD). The police threatened to arrest them, but they stood strong and eventually Denver made their bus system accessible for everyone!
Dawn then talked about how people in nursing homes are being hurt, and how according to her 200,000 people in nursing homes in the US alone have died of COVID. She said that a group she worked for, ADAPT(American Disabled for Attendant Programs Today) attempted to get legislation passed in the House of Representatives. They were told they needed 218 supporters and got 238, but they still didn’t get it passed. They tried in the Senate, but came thirteen supporters short. ADAPT is still trying, but they will need a congressperson to propose it to get proper infrastructure for the disabled during COVID. Dawn’s points on how there isn’t proper infrastructure for people with disabilities was perfectly proved when it rained while she was talking. We went under the steps of the capital building for cover, but it was completely inaccessible for Dawn, who is a wheelchair user. However, after the rain went away she was right back with Barry teaching us about these issues. They were determined to create a better world and inspire us to do the same. It empowered me! 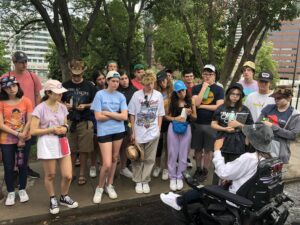 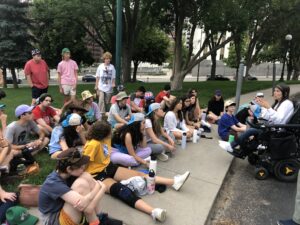 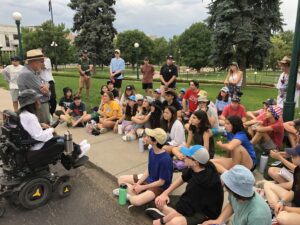 After dinner we had a pretty exciting experience- the movies. It was my first time in over a year, and it was for a lot of us. I went to see In The Heights. I don’t want this to become a movie review, because if it did I would go on forever, but it was really great. The music, the performances, it was all incredible. Some other people went to F9: The Fast Saga (who decides what those movies are named?) and Quiet Place 2. I think the people who saw In The Heights definitely made the best call. It was a great way to cap off a great day!