When I first scanned our schedule for a day I wanted to chronicle, this day jumped out. The combination of city and programming was incredibly appealing, and it didn’t disappoint.

After a nice late hotel departure of 9:00, we ventured through the grind known as LA traffic to our first meeting of the day, with the California chapter of Health Care for All, a group  that advocates for a nationwide single payer healthcare system. I went into this conversation opposed to a completely government-sponsored healthcare system.

My belief is that if a government option is truly better, people will recognize that, and choose that public option.  That belief remains intact, however the reality that America is first in per capita health care spending(12,000 per citizen) and have worse life expectancies and health care outcomes than other 1st world nations did(average if 6,000 per citizen) demonstrate that a government funded health care system
is successful in similar nations that have implemented it(Western European nations, Nordic countries, and Canada). Words matter, and while many of this speakers arguments were persuasive, the terms “apartheid” and “caste system”, in reference to our health care system came off as sensationalized in my view. 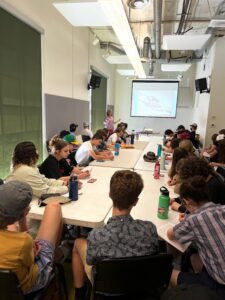 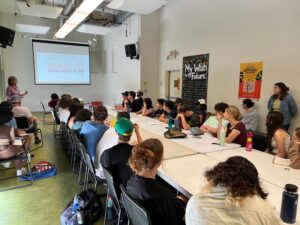 After our meeting, we had lunch at a food hall in the same building, before our next meeting with a “Never Trump” Republican. Billy had first met our speaker, Patrick Jones,  before most of us were born. In that faraway time of 2003, they were political opposites, and agreed on very little. In a sign of the Republican party’s shift, they now agree on quite a bit, ranging from dissatisfaction with party leadership, to the party’s authoritarian turn, and the value of protecting democracy(both ours and other nations)and the peaceful transfer of power. 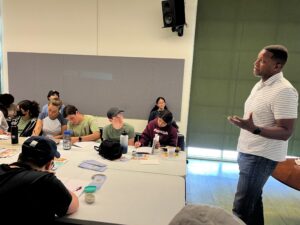 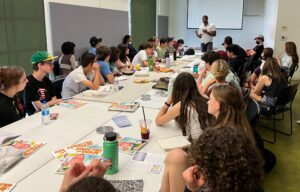 Jones expressed that a party should serve as a gatekeeper, and the modern day Republican Party has been taken over by “the loonies.” Something else that I appreciated was his shorter prepared presentation, and eagerness to converse with us, as opposed to other speakers. Additionally, while he repeatedly articulated the importance of democracy, he gains credibility to wax poetic about such ideals, as he agrees with proposals that would make America more democratic, such as taking action against partisan gerrymandering, and the unbalanced nature of the electoral college. I’m incredibly thankful to have met with him.

After that meeting, we drove to a local farmers market. As one would expect, the farmers market had some delicious fruits and other organic foods. What stuck with me though, was what myself and others initially thought was a very long line to “get in” to the farmers market. In actuality, that line was for those with food assistance, another reminder of the “access lottery” we’ve all won, and how fortunate we are to be on this trip. 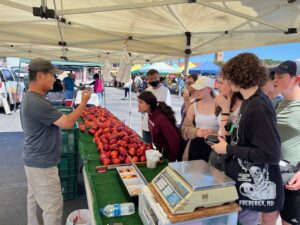 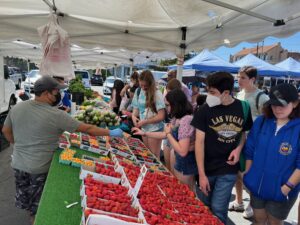 After the farmers market, we stopped in South Central LA, and discussed the significance of the Rodney King beating and subsequent riots, as well as the tinderbox for the explosion of violence that followed the acquittal of the officers that beat King. The beating preceded the murder of George Floyd by 28 years, and we learned about its impact as the first “viral” video demonstrating police brutality. 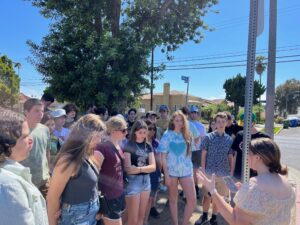 Following our stop in south central, Venice Beach was enjoyable. We split up, and some people got food, some went in the ocean, and some just walked around. I was able to meet family, which was a great experience, especially as I hadn’t seen them in years. 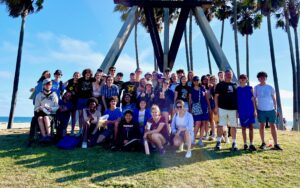 We then went to Beit T’Shuvah for the evening.
Beit T’Shuvah is a drug rehabilitation facility that incorporates Judaism into their rehab efforts. We heard the specific stories of three recovering addicts. Their stories varied in the drugs used, time sober, and family situation, but some common realities were after coming close to death, they felt they were all here for a reason, and that the community of Beit T’Shuvah has been instrumental in their recovery process. Among the phrases that stuck with me was “Drugs don’t discriminate.” Another common idea expressed was the horrifying nature of fentanyl, even when compared to hard drugs like meth and heroin. Hearing the personal stories of our three speakers was more effective than any lecture in health class. 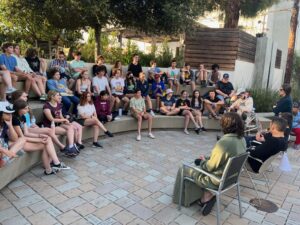 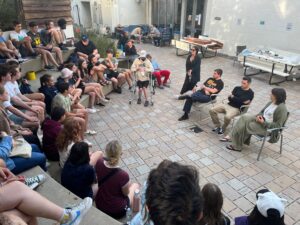 This was a great day, jam-packed with insightful speakers, and I’m looking forward to the rest of our time in California, and the cities we have yet to visit on this one of a kind journey.