Today was unfortunately one of a couple travel days on our journey around the Unites States. Although only sitting in a bus, driven by our favorite bus driver, Mr. Tony, the day was still filled with great events.
We began the day waking up and then departing on a later note, around 9 o’clock. We began driving towards our lunch destination near the college town of Santa Barbra. Once arriving, a few comrades and I eyed a couple of electric scooters parked just off the side of the road. Like most teenagers, we ended up blowing 20 dollars exploring a beautiful  college town. After finding yet another poke restaurant on the trip, I decided to eat there and then continued to ride the scooters around. We then boarded the bus and began driving down the California Coast.

After many, “I need to pee”, comments on the bus, Tony pulled over on the shoulder near a beautiful  beach. We got off and immediately everyone ran down to the beach. Personally, when I see water it is sadly hard to turn away. So, Elijah, and I ended up running straight in the water, while the water would splash all about, resulting in two unhappy occupants in the bus later. We then drove the rest of the way heading to the hotel. 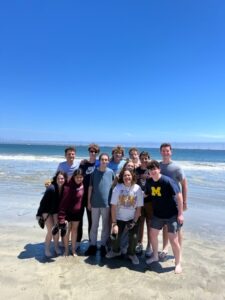 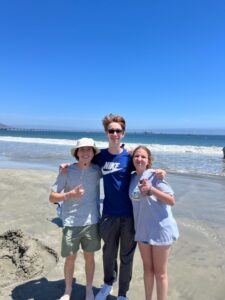 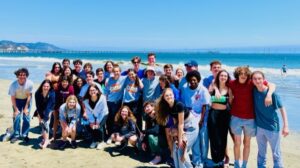 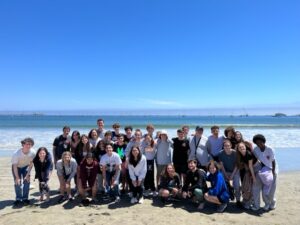 After around 6 more hours, we arrived at The Clancy. We got our room keys and put our stuff down in our rooms and came back down stairs to head for dinner. We walked to a food hall not to far away and dispersed to different restaurants. I ended up having Chipotle, which yet again filled my stomach. We then headed back to the hotel for an hour of free time which was used on sitting in the room and talking amongst my roommates for the night. We all then said goodnight and went to sleep.