Today was another packed NYC day. We started off the day with a walking tour of Harlem with an old friend of the program, Derrick. He walked us through the old historic Barrio neighborhood and told us about the history of the communities who moved there and developed the iconic culture that we walked past. We walked past countless vendors selling tamales and drinks, and we got to go into a Puerto Rican store. We could clearly see the pride and joy for their heritage everywhere we looked.

After that, we moved out from the Latino part of Harlem to explore more of the neighborhood’s deep roots. An interesting fact that he told us about Harlem was that at one point, it was the 3rd largest Jewish community in the world. I personally found that very interesting because in my mind, as a non-New Yorker, Brooklyn is the famous Jewish area.

We meandered into the Black part of Harlem and were shown a ton of different important historical buildings. We saw a mosque that Malcolm X used to preach at right along Malcolm X Boulevard. Apparently, the corner we stood on was right near where he would stand and preach to anyone who would listen walking along the street. We also learned about Madam C.J. Walker who became the first female self-made millionaire through her hair care line for Black women. Her products promoted embracing natural curls rather than damaging hair to straighten it out, a movement still seen today thanks to her success. Derrick told us that she lived in a building known as “the dark tower” because it was a bastion for Black thought in Harlem.  As he taught us about the history of the neighborhood, I also learned about the origin of one of my favorite meals of all time: chicken and waffles. The party scene was very vibrant in Harlem so as people would leave their parties in the early mornings, they would have a craving for fried chicken from being up all night but also for breakfast given the time of day it was. Thank you, Harlem!!! 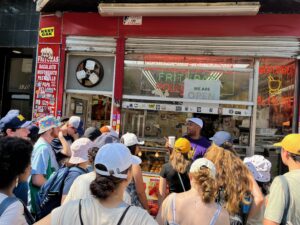 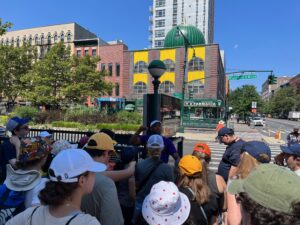 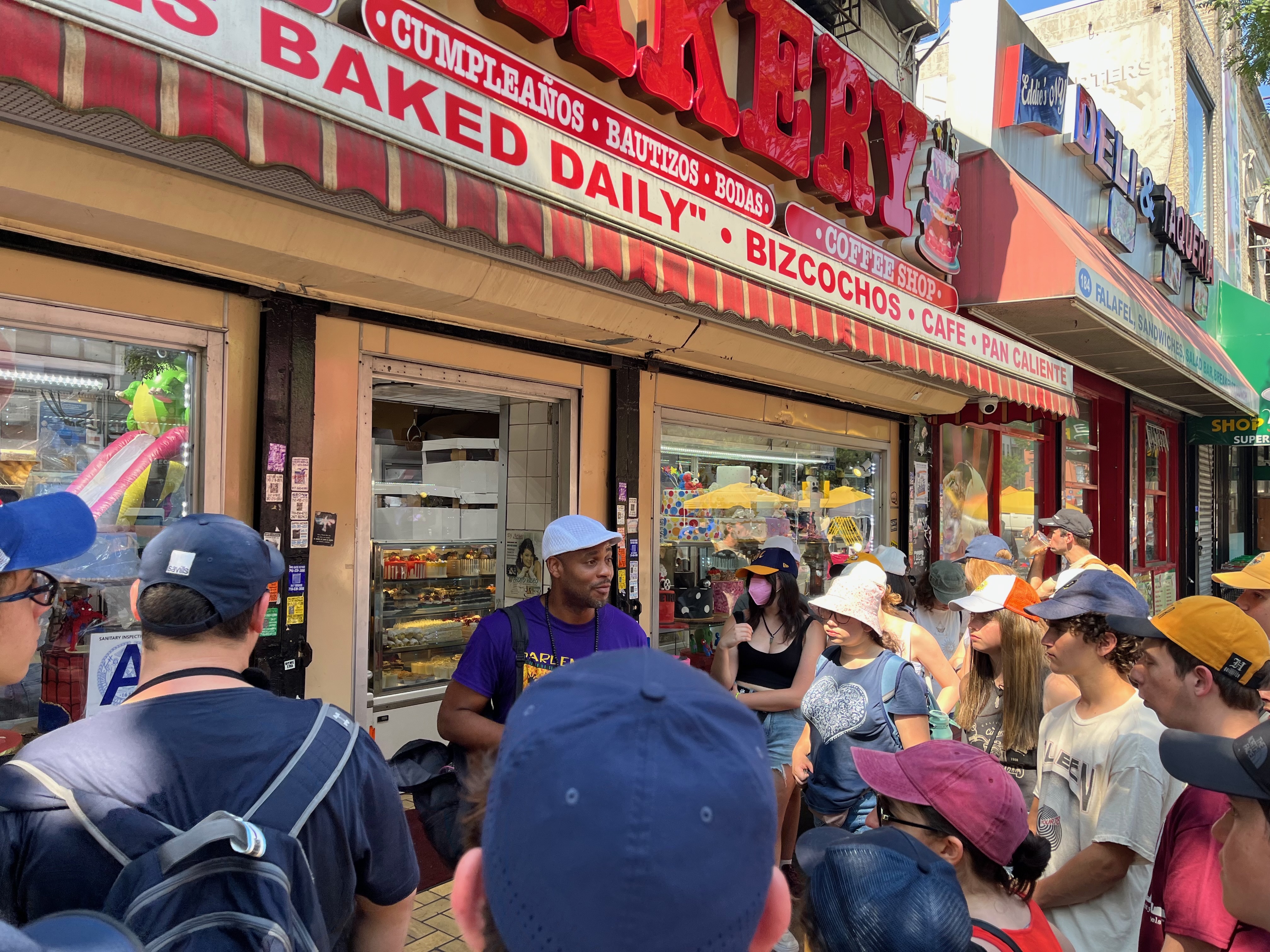 Our next event of the day was meeting with Freddie DeBoer. He was on the agenda to speak with us about cancel culture and his experience as a person who actually was “cancelled,” but the talk went in a different direction which I enjoyed. He spoke to us mainly about setting realistic expectations for us especially when looking at the college application process. Although at some points he was brutally honest with us about how it is unlikely that we reach all of our goals, I was able to take away a lot. He talked a lot about how a big part of becoming an adult is being able to settle with the different compromises you have to make every day. It was sort of like a reality check—our lives will likely unfortunately not come out exactly the way we dream of them so we must teach ourselves to be ready to make these compromises when they come up. He used college as an example of this: even if we don’t get into our number 1 school, we will still likely go SOMEWHERE and be almost guaranteed that we would have an amazing time and meet amazing people. This was definitely a talk I would’ve appreciated before I applied to schools, but there are plenty of lessons I can take away for the rest of life, too. He did shift the topic of conversation to politics every now and then, from affirmative action to the electoral college and senate. Many of his beliefs were focused on fairness and making sure that everyone gets a fair and equal opportunity compare to one another. He also did briefly touch on cancel culture. He concluded that the left spent too much time focusing on creating the “safest space possible” and not enough time on working against the injustices in different societal systems. I thought it was very interesting to hear what he had to say, even though it did deviate from what our expectations were. 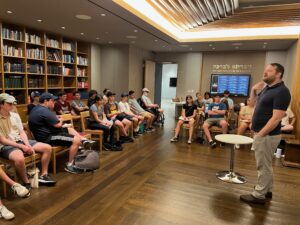 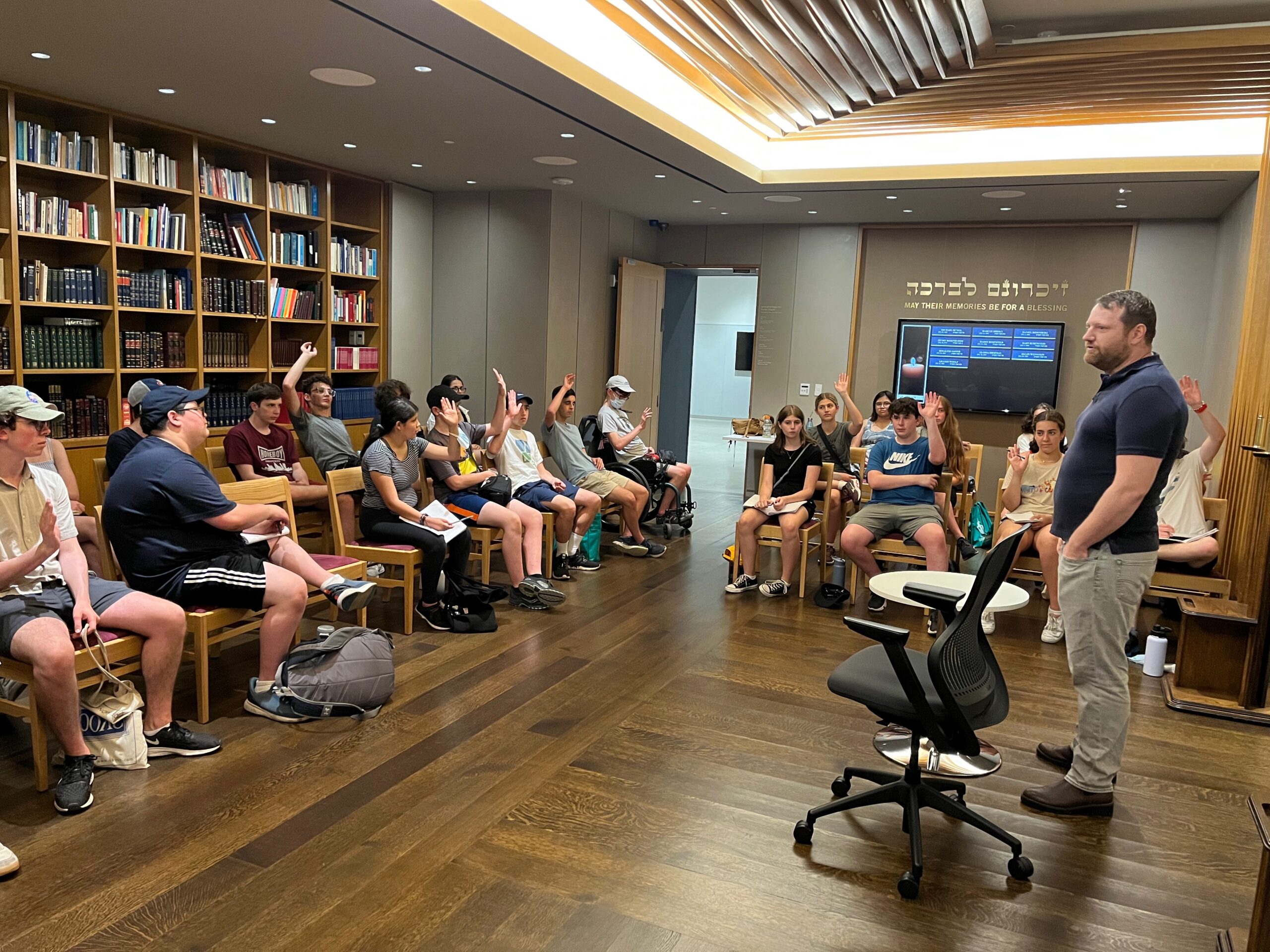 Finally, after dinner, we ended the night with another conversation with Scott Fried, our friend from Vegas. While last time he spoke with us mainly about accepting ourselves and also his own experience with HIV/AIDS, this time, he educated us on the history and timeline of the disease’s development. He taught us about a group called Act Up who performed in-your-face activism under the idea that this would force people to confront the harsh reality that many Americans were suffering through. Personally, he was more comfortable joining a support group and talking out all the feelings he was experiencing. He told us that even this can be a form of activism. While it may not seem the same as having an open casket funeral procession down Pennsylvania Ave. like Act Up did, it was still the way he was an activist. He was able to speak his truth and be vulnerable in these support groups which was exactly the right outlet for him. He explained the grim history of the government’s response to the pandemic and how Ronald Reagan, president at the time of the outbreak, refused to even say “AIDS” for seven entire years while Americans were suffering and dying from the illness. We watched a clip of an early press conference where, when asked about the disease, the press secretary and other reporters were laughing at the the thought of it and did not behave as if it was a serious matter at all. This delayed response and reluctance to help was solely because of the community that the disease largely affected: gay men. However, Scott also showed us how Hollywood had a big role in changing public opinion and making it a more visible issue. Tom Hanks, when receiving the Oscar he won for his performance in Philidelphia, delivered a powerful speech about what was going on with AIDS at the time. The final story Scott told us before we headed back to the hotel was about how he visited his friend in the hospital, Edgardo, during his final hours of life. The thing Edgardo told Scott that Scott wanted to pass onto us was a short message: “live a little.” He told us that this is the most important thing to know as activists. To me, this meant that we need to actually experience life fully, no holds barred. Ending with Scott was a great way to end the busy day because his energy and enthusiasm really rub off on this group. It was another great day and I can’t wait for more tomorrow! 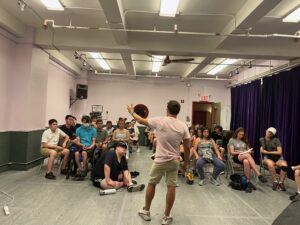 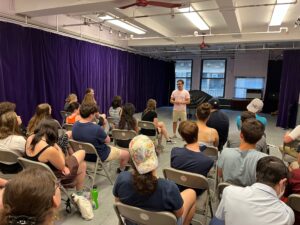 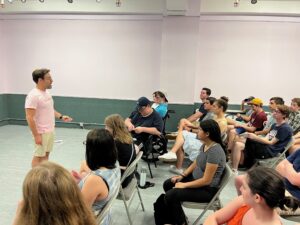