The morning was like any other morning. I woke up 15 minutes before our wake up time due to Gadi’s advice, I got changed in the bathroom and filled up my water bottles (we have had a lot of hot and humid days). I went down the elevator with Joli, I found out she bought a guitar in New York, that’s very cool. I decided to get my breakfast from Starbucks which was conveniently located right next to our hotel. I went into the Starbucks and got my usual order and I went back to the hotel to eat. After that I went to the legendary Tony who is our bus driver, I handed him my suitcase jumped on the bus, wrote an email to my brother and got ready for a short ride into Philadelphia.

We began our ride into Philadelphia with announcements from Billy who was finishing up his muffin. Silly Billy! He informed us about our schedule and how our meeting with Michael Smerconish would go. We were all pretty nervous about this because it might be on TV; some got into their Shabbos clothes but most including myself just got in the normal tee and shorts. We passed by many a Pennsylvania staple: the Schuykill River, a mural and a Wawa.

When we arrived at the museum a half hour early so we first visited the grave of Benjamin Franklin. We all noticed how there were pennies on his grave. Billy explained how one of Franklin’s favorite sayings, “A penny saved is a penny earned”, helped inspire the tradition. We walked back to the museum where we talked about which parts of the preamble speak to us. I mentioned the first word, “we,” because America is a democracy, not a rule by one like we had under King George, but a rule by we. Clarissa also mentioned “a more perfect Union” reminding us that America will never be a perfect country but we should continue to strive to make it a better and more equitable nation. We then had some free time to hang out before we headed into the museum.

We first entered the Sidney Kimmel theater where we watched a movie about our constitution, how it was written, and how it has evolved. I enjoyed how it balanced both the great aspects of the Constitution and the scars of slavery and bigotry. We then had forty-five minutes to freely explore the museum, I have been here before so instead of touring the main exhibit I quickly checked out the Founders’ Hall and then went downstairs to the Slavery and Reconstruction Exhibit. This was an interesting exhibit and I liked how it viewed this important time of history through a constitutional lens. It also talked about how this era also tested vague sections of the Constitution including secession and impeachment. Another interesting part of this exhibit is how it explained Fredrick Douglass’ political philosophy that change had to be made via the Constitution and that the Constitution inherently protected civil rights. The exhibit didn’t just praise the Constitution and American government, it also made legitimate criticism of the horrific Dred Scott decision and Fugitive Slave Clause. Overall, I agreed with the central thesis that while we have made horrible errors with slavery we have been able to use the Constitution as a document to affect change. I then went to gift shop which was the best one of the trip so far. I got a t-shirt, a couple of keychains and a bookmark. 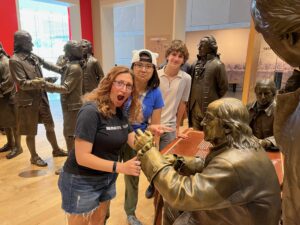 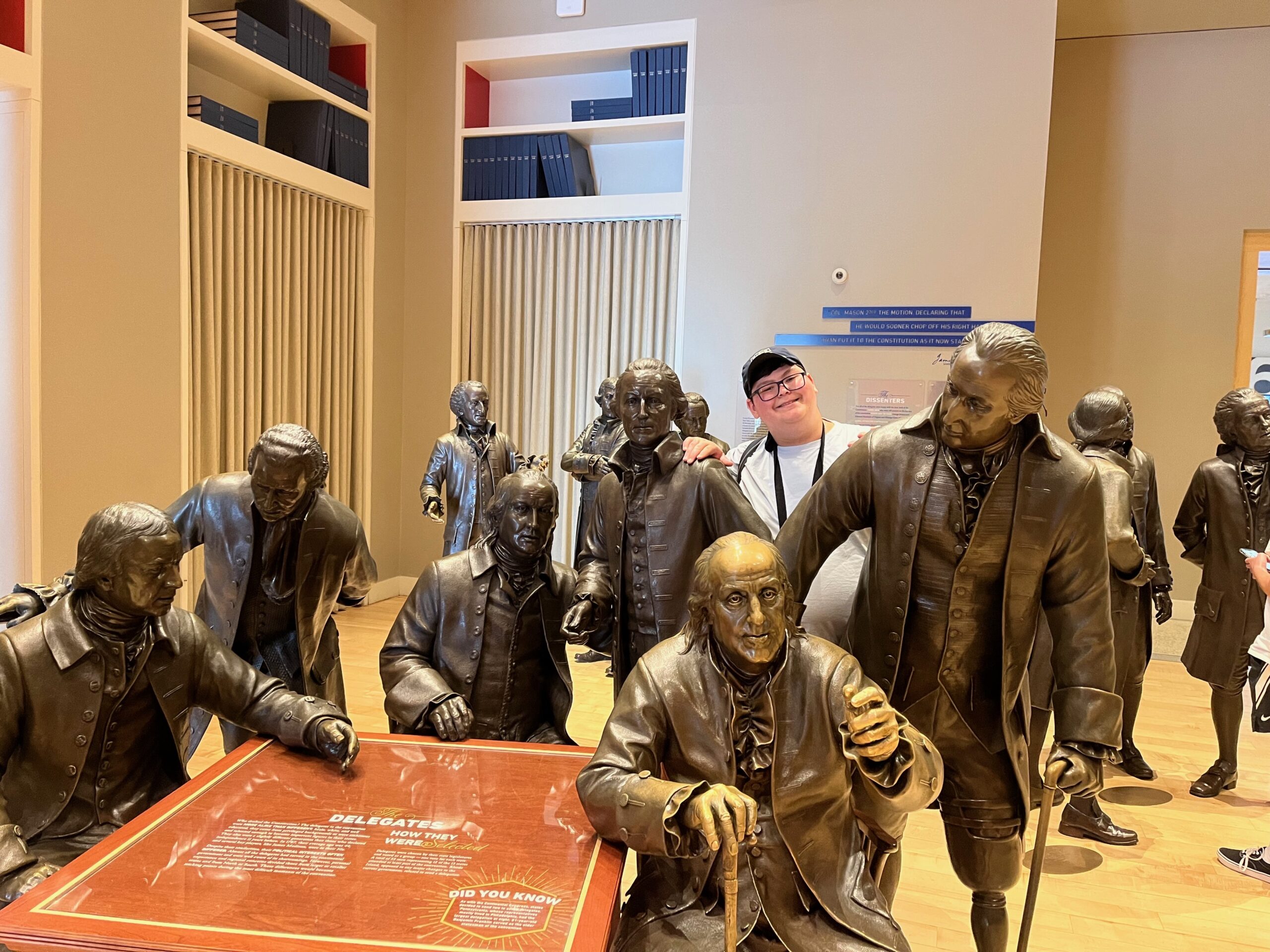 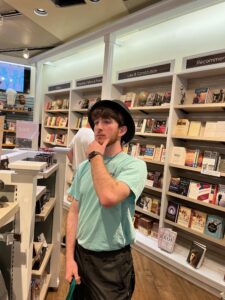 We then went to the Bourse Food Hall, which was only a few minutes walk. We had thirty minutes to explore and eat. I got some pizza from Bricco Pizza Romana and some onion rings from Mariano’s cheesesteaks as a side, they were both pretty decent but not as good as I had expected.

We then walked back to our bus. Tony spectacularly drove us to our next stop which was Villanova University where we talked with Michael Smerconish.

Michael Smerconish started off as the head of the Lehigh University Reagan/Bush club, and ever since he has always been involved and interested in politics. In 2010, after years of discontent with the Republican Party, Michael announced he would reregister as an independent. He recalled to us how he was shunned by the party but he thinks this was the right move, he feels like our current system disadvantages moderates because some states have a closed primary system and both parties tend to follow the policies of their extremes. He also suggested that we should consider forming a third, more moderate party and that we need to all work on having a balanced media diet.

We asked him a couple other questions as well. Ethan G. asked him about the liberal bias of CNN, Michael disagreed saying that CNN gives him independence when it comes to what he talks about. Hannah asked about far-right media hosts like Rush Limbaugh and Alex Jones. He said that his line is not if they are kooky but if they are hateful. He also said that as a society we have become hypersensitive and that we need to accept that people will have different views. He said that cancelation is only acceptable if it is because of hateful behavior (racism, sexism, xenophobia). We also heard some of his positions on political issues. He considers climate change an existential threat, supports gun control and believes that it is harder nowadays to climb to socioeconomic ladder. Interestingly, while he is pro-choice and supports federal legislation protecting abortion access, he said that there was solid law in the Dobbs case. We then had an opportunity for some pictures and I was able to record a video for a friend.

The meeting overall was very interesting. I agreed with a lot of Michael’s positions, I consider myself a centrist so his middle-of-the-line approach and his commitment to transparency and a diverse media diet appealed to me. It wasn’t the best location, it was outside and the bugs were picking at us, but it was nice weather and we have been through worse. The meeting was quite stressful because Michael was recording this meeting, he wants to post it on his website, some kids are even speculating that it may go to CNN but I am not as confident with that. We went back to the bus to begin our long bus ride to DC, but before we could begin the largest segment of the ride we stopped for a bathroom and snack purchase break. We were then back on the road to our nation’s capital. 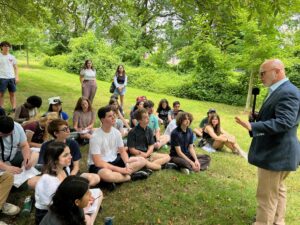 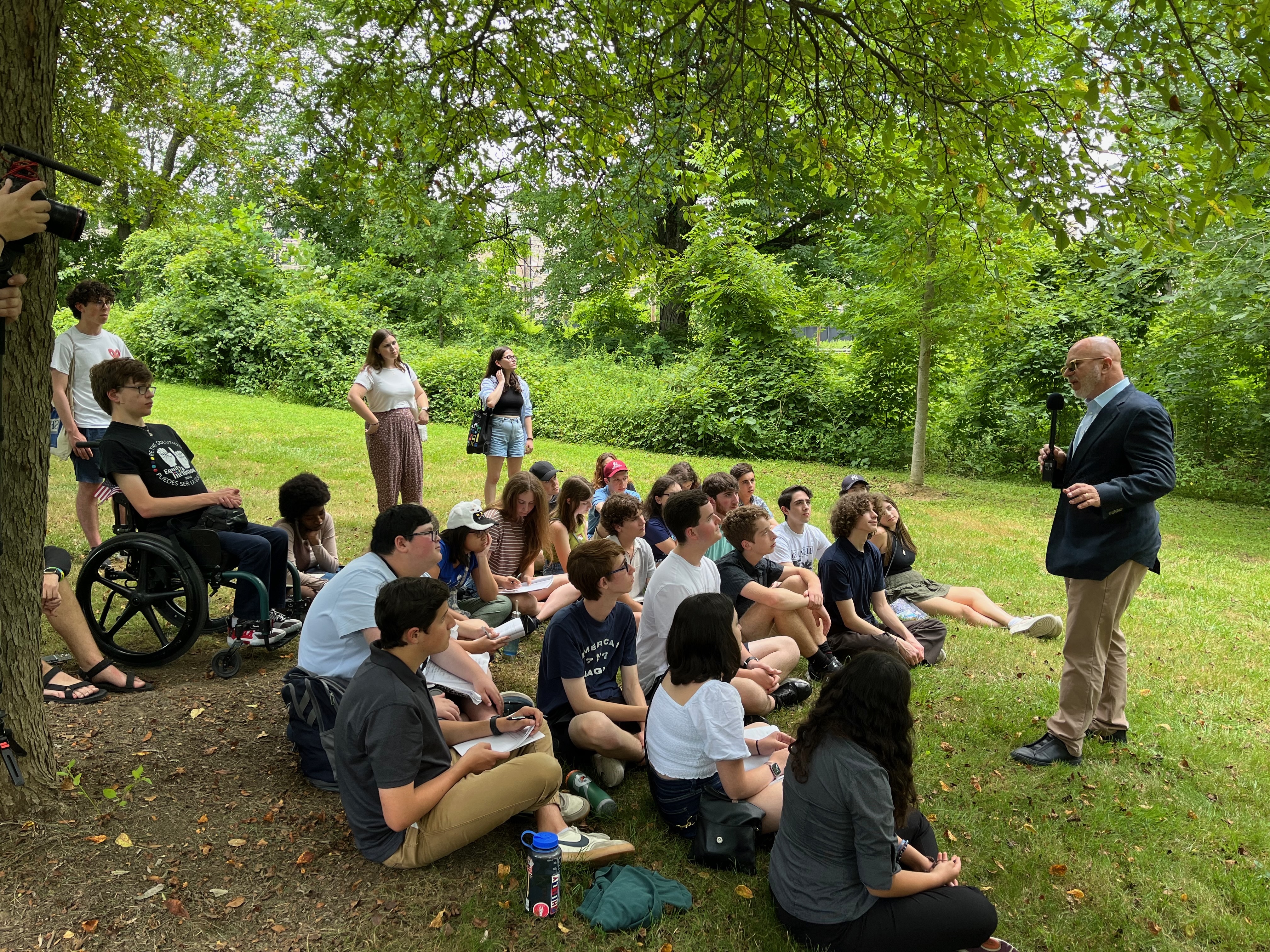 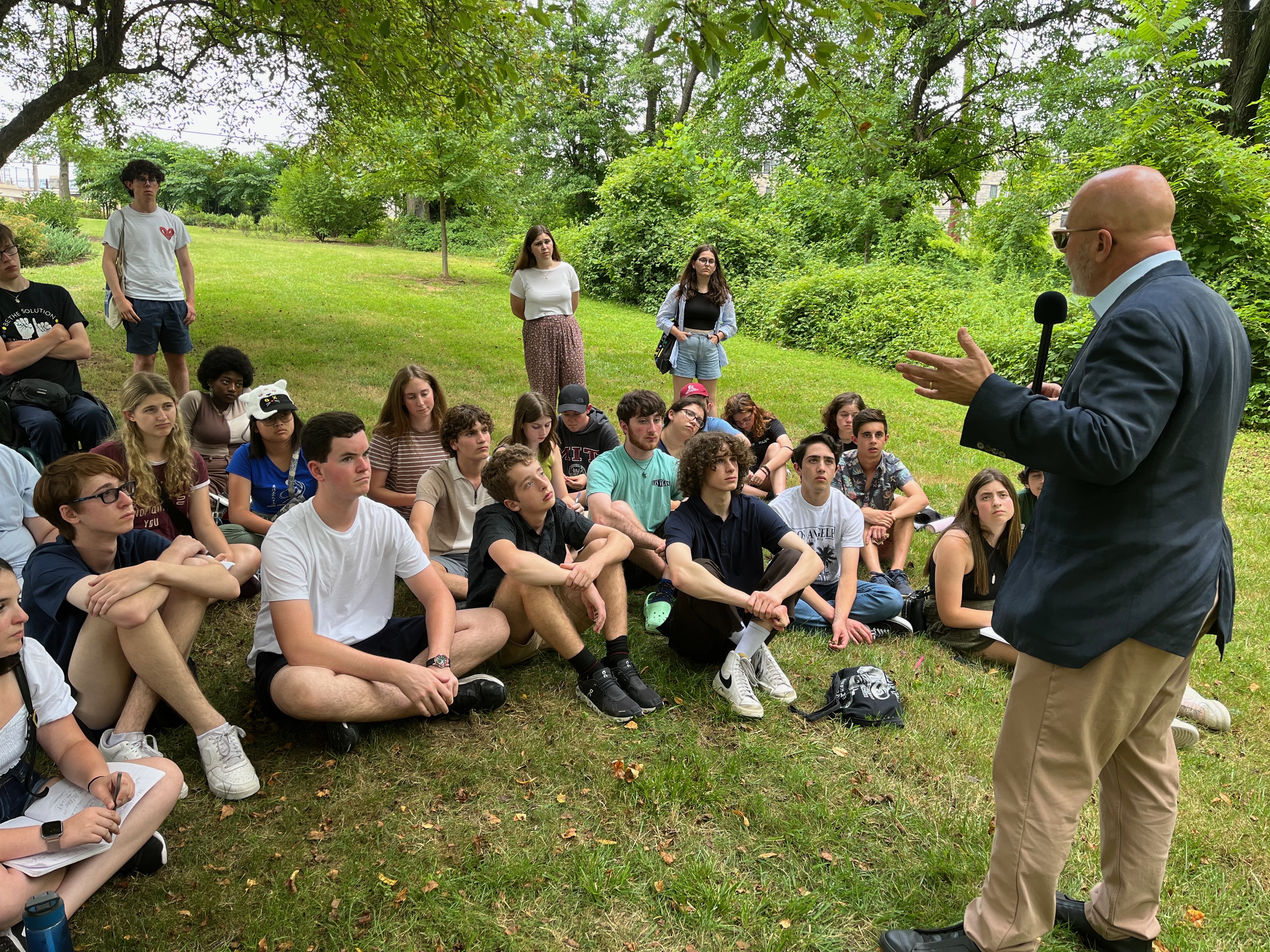 The drive wasn’t so interesting but we made our way to our dinner stop which was in Baltimore. I had taken a nap so I was awaken to Billy playing “Good Morning Baltimore.” We then got off the bus, and went to buy ourselves dinner. I got a quesadilla and some guac from a place called Amano Taco, it was fine. Some other people got some pizza and some got sushi. After 45 minutes we returned to the bus and continued to make our way to DC.

After a long drive we finally arrived at our hotel!
We didn’t have enough time to put our bags upstairs because we had to go in immediately to our final meeting of the day which was with Daryl Davis who explained how he helped to deradicalize members of the KKK. He started by explaining his childhood and how he was exposed to different cultures, so when he learned what racism is he was confused. He posed this question to himself: How can I hate someone if I do not know them?

Daryl then flashed forward a few decades to when he began befriending KKK members, he was interested in their philosophy and why they had a hatred of people of color. He explained that the underlying issue was ignorance. He said that ignorance leads to fear which leads to hatred which leads to destruction. He said that the antidote to this problem was open and respectful dialogue where both sides are listened to and considered. He then talked about how over time through dialogue he was able to deradicalize some members, including one who he took to the African American Museum in DC and led his bride down the aisle.

Daryl was a very interesting speaker. It was quite late when we listened to him so everyone was a little sleepy but we were all engaged by his incredible story and message. I thought that his main message of respectful dialogue is an important one. We said bye to Daryl as we headed up to our rooms, this is our final rooming arrangements for the trip. I finished up the day by talking to my roommates about the day and our thoughts on it, and I stare at a black and white picture of the Lincoln Memorial as I doze off to sleep. 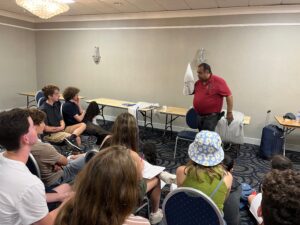 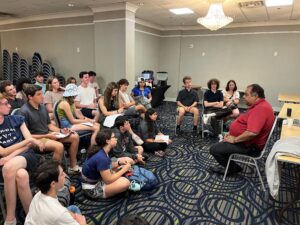 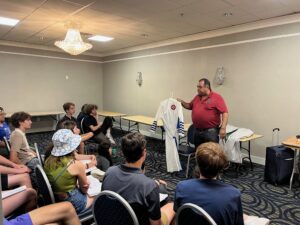 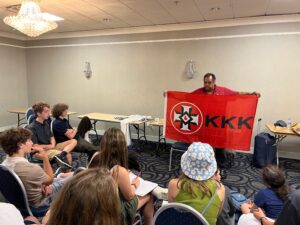 So what were the lessons we learned today? First, the bedrock of America is our founding documents and while they aren’t perfect they have served as a guide for how we as Americans should conduct ourselves as both a collective and diverse body and as a body striving to better ourselves. Secondly, we need to have a diverse media diet. When we listen to only one side we aren’t able to fully understand and comprehend the issues at hand. How are we supposed to create legislation on racial equity if we haven’t at least heard the position of the right-wing senator? Lastly, we need to have respectful and open dialogue. Not only will this likely allow people to be open to our positions it will allow us to be open to theirs.

Tommorow is another long day where we finally get to begin exploring our nation’s capital. As Billy explained to us tonight, DC is a very competitive city so it will be interesting to listen to the very passionate arguments presented to us. We start with the National Jewish Womens Council, we then speak to Senator Jon Ossoff, AIPAC and the Heritage Foundation. Tune back into the journal tommorow to hear our thoughts on these meetings.