After a late night talking to Daryl Davis about his experience talking to people with different views, we left the hotel at 8:45 for a jam packed day.

We made our way to Capitol Hill for our first meeting of the day with Sheila Katz who is the CEO of the National Council of Jewish Women (NCJW). We met wIth her on the steps of the Capitol and there was a lot going on around us including a press conference on the lawn near us. She started her talk with her activism experience and how she grew to the leader she is today. She got her start working on voting rights as a teenager and encouraged us to find something that we’re passionate about to work on. Before we get to that level, we should focus on something small that can raise you to a bigger level when you reach success. For Sheila, that was a Walmart that sold guns like candy across the street from her school. She called corporate to complain about it and how it made her feel unsafe in the wake of Columbine. Eventually, the CEO of Walmart met her and a couple other students at her school to talk about it. At first, he listened to her comments, nodded, and said okay as if the information was going in one ear and out the other. Eventually, he made a move for the door and she got upset because no conclusion had been reached. She got emotional and threatened to tell the media that he didn’t listen to her complaints. At the threat of Walmart’s public relations, he sat back down and came up with a solution. Eventually, Walmart stopped selling guns in stores. Today, her work with the NCJW surrounds reproductive rights, marriage equality, voting rights, and equal pay. While she was sharing her opinions, she brought up that she thought the voting age should be lowered to 16. I found this intriguing as she justified it with the fact that elections should be taught in school, and a good portion of teenagers are mature enough by the age of 16 for their voice to be heard. She also mentioned that there should be a system to vote online so that it isn’t as inconvenient for working people to vote. Finally, the NCJW has over 200,000 members working to combat these issues with over 50 partner nonprofits in all 50 states. 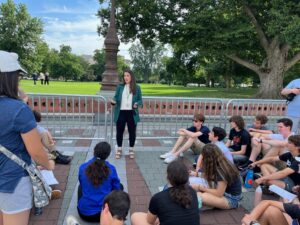 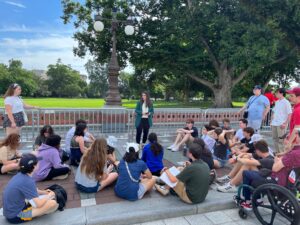 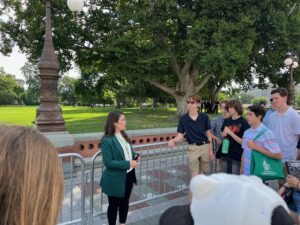 After concluding our talk with Sheila, we met with Georgia Senator Jon Ossoff, a long time friend of the program and current US senator from Georgia. He was supposed to attend one of the first summer journeys of Etgar and even designed the first website. However, he got the internship with former Congressman John Lewis instead. While he could only stick around for about twenty minutes, he answered some questions addressing voting rights, Judaism, and the filibuster. We got to take some photos with him and then he had to get on with his day and so did we. 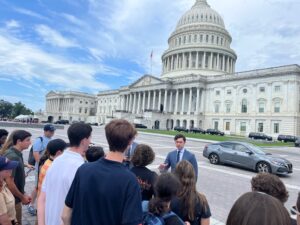 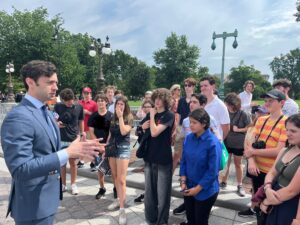 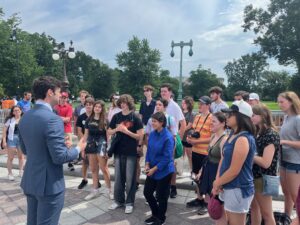 We made our way to the AIPAC headquarters for our meeting with Karli, Eliza, and a few interns on the leadership development team to discuss the Israel-Palestine debate. We started off by talking about misconceptions of AIPAC, like that they are a far right organization fighting for a one state solution. In reality, they are a bipartisan organization that fights for economic support for Israel in Congress. They believe that strengthening the US Israel relationship is mutually beneficial. I found it most fascinating that they don’t take a stance on Israeli domestic policy and instead acknowledge that there are flaws in their democracy like there are flaws in ours and support the country as a whole. This also helps them keep things neutral as they work closely with all 535 members of Congress. They make members care by offering money, speaking with constituents, making the topic relevant, and taking them to Israel so they can see the issue from their own perspective. One thing that I found fascinating is their involvement in elections for congress. While you would think there are hundreds and maybe thousands of lobbyists working to get pro-Israel candidates in office, it’s actually the people that are doing this. Many teenagers and young adults assist in campaigns to help get these candidates in power which is way more powerful as these are the constituents that they are trying to represent. 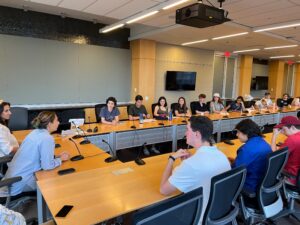 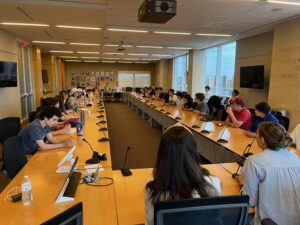 After a long morning, we had some time in Chinatown for lunch and free time. My friend and I went to one of many small Chinese restaurants in the area which was fast, cheap, and delicious. Perfect for an Etgar lunch!

Our final meeting of the day was with the Heritage Foundation at their headquarters. What we heard goes against our meeting with Eroque from United for a Fair Economy in Boston a few days ago. We met with Richard Stern who is a senior policy analyst focusing in budget policy. While I don’t agree with the majority of what he said, I respect how knowledgeable he is on the topic and was able to answer every single question professionally and in detail. He began by talking about how an economy is supposed to help the people flourish and follow their dreams. He quickly moved into wealth redistribution and how the US spends 3.9 trillion on it a year. If we split this money evenly, every family would be 152% above the poverty line. However, this is flawed as the money is allocated disproportionately. Some other topics he covered are social security, the stock market, and taxing the rich. His defense for not taxing the rich was that taxes would take away majority of a company’s profit. If we use Elon Musk as an example, if he were taxed after Tesla, he probably wouldn’t have enough money to start SpaceX. I see where he’s coming from with this argument but most mega corporations will still have a profit margin high enough that taxes won’t diminish it all and they will still have room to grow which will further stimulate our economy. After the conclusion of our conversation, the outreach staffer that was with us took us to the rooftop of the headquarters. The view was magnificent as it is close to the Capital. However, this is only my second favorite rooftop in DC. 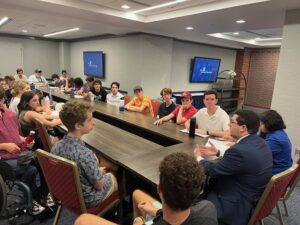 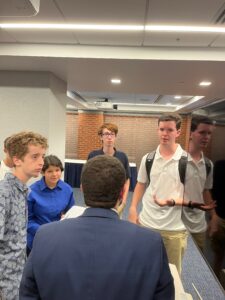 We made our way to Georgetown for dinner and free time to close out our day. A few friends and I went for sushi and then went to a local bakery called Baked and Wired. I’ve been to DC a few times so I knew it was going to be good, but we were disappointed when it was closed for the day. Instead, we ended up going for a walk to the nearby Watergate complex and Kennedy Center along the Potomac River. This was really fun as it was not too far but we got to see some great views. We then went to the Kennedy Center rooftop which is my favorite in the city. From there you can see boats on the  Potomac River, Georgetown, the Watergate complex, the National Mall, and low flying planes about to land at DCA. This was really fun and a great way to end this long and intense day.