We had a late start today at only 8:15 am! We ate our breakfast and then moved to the lobby where we had our framing discussion for gun control and gun violence prevention, talks we’ll have later in the week. We talked about the roots of gun violence, the second amendment, and our own opinions on gun control. We had some differing opinions, but we still kept civil all throughout. 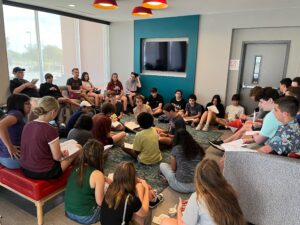 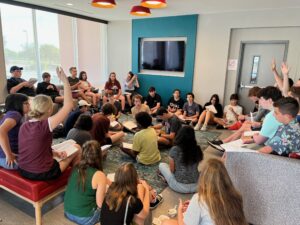 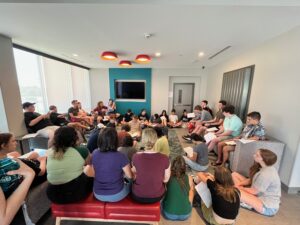 From there, we hopped on the bus and went to the brand-new First Americans Museum just outside of Oklahoma City. I learned about the Trail of Tears, the genocide of thousands of native people, and powwows, a wonderful tradition that celebrates life and culture. 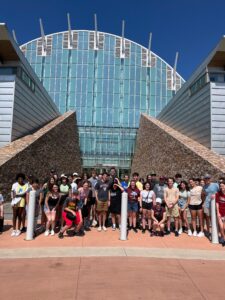 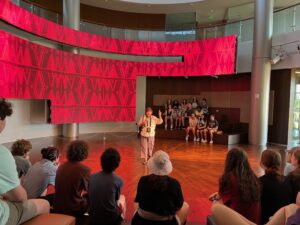 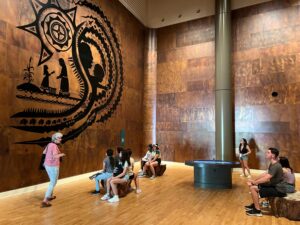 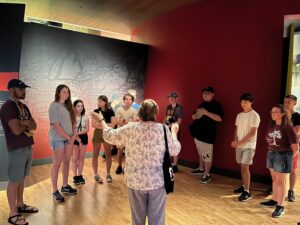 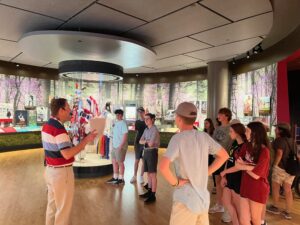 We then went to yet another food hall, where the absolute cutest puppy was learning how to deal with people. From there, we settled in for a four-hour long bus ride to the place I’ve been waiting for this whole journey – Dodge City, KS.

After a quick Walmart stop, we were well on our way. In the middle of nowhere, Kansas, we stopped at a dirt crossroads, where Billy informed us that our bus “broke down.” This was just a stop for a photo op and to get to know the land. 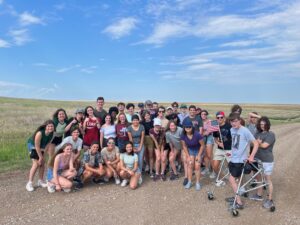 We concluded with a group photo, and continued on our merry way into nowhere. Not a while longer, we arrived at our hotel in Dodge City, where we sorted our laundry and had some free time before our dinner of a Thai food buffet. Billy then announced a special treat: Dairy Queen!

We loaded onto the bus once more and drove a couple of minutes into what can be described as the middle of town to the DQ. While waiting in line, we talked, took silly photos, and laughed with each other. Our dessert could be described as a success. After we were done, we piled back on the bus and got our own short little tour of the famous Old West town, and a Fourth of July singalong burst out. We returned to the hotel for one final lesson of the day. 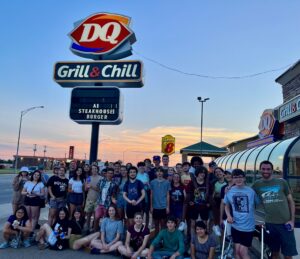 Growing up with Wild West movies like The Dollars Trio (A Fist Full of Dollars, For a Few Dollars More, and The Good, The Bad, and The Ugly), Butch Cassidy and the Sundance Kid, and True Grit, I consider myself a Wild West fan. We sat down on the lawn outside of the hotel as our councilor, Josh, played us the main theme from The Good, The Bad, and The Ugly and gave us some Wild West history. He concluded with singing us a song by Woody Guthrie, “Pretty Boy Floyd.” We then had an hour of free time before turning in for the night.  Our time in the Wild West got a special bonus when one of the historians from the local museum showed up at our hotel in his sheriff costume! 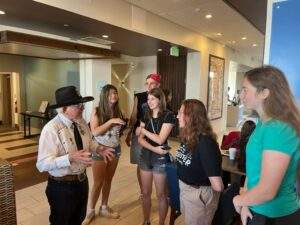